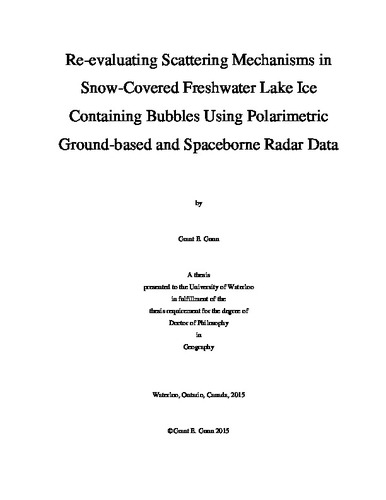 Lakes are a prominent feature of the sub-Arctic and Arctic regions of North America, covering up to 40% of the landscape. Seasonal ice cover on northern lakes afford habitat for several flora and fauna species, and provide drinking water and overwintering fishing areas for local communities. The presence of lake ice influences lake-atmosphere exchanges by modifying the radiative properties of the lake surface and moderating the transfer of heat to the atmosphere. The thermodynamic aspects of lakes exhibit a pronounced effect on weather and regional climate, but are also sensitive to variability in climate forcings such as air temperature and snow fall, acting as proxy indicators of climate variability and change. To refine the understanding of lake-climate interactions, improved methods of monitoring lake ice properties are needed. Manual lake ice monitoring stations have dropped significantly since the 1990s and existing stations are restricted to populated and coastal regions. Recently, studies have indicated the use of radar remote sensing as a viable option for the monitoring of small lakes in remote regions due to its high spatial resolution and imaging capability independent of solar radiation or cloud cover. Active microwave radar in the frequency range of 5 – 10 GHz have successfully retrieved lake ice information pertaining to the physical status of the ice cover and areas that are frozen to bed, but have not been demonstrated as effective for the derivation of on-ice snow depth. In the 10 – 20 GHz range, radar has been shown to be sensitive to terrestrial snow cover, but has not been investigated over lakes. Utilizing a combination of spaceborne and ground-based radar systems spanning a range of 5 – 17 GHz, simulations from the Canadian Lake Ice Model (CLIMo), and ice thickness information from a shallow water ice profiler (SWIP), this research aimed to further our understanding of lake ice scattering sources and mechanisms for small freshwater lakes in the sub-Arctic. Increased comprehension of scattering mechanisms in ice advances the potential for the derivation of lake ice properties, including on-ice snow depth, lake ice thickness and identification of surface ice types. Field observations of snow-covered lake ice were undertaken during the winter seasons of 2009-2010 and 2010-2011 on Malcolm Ramsay Lake, near Churchill Manitoba. In-situ snow and ice observations were coincident with ground-based scatterometer (UW-Scat) and spaceborne synthetic aperture radar (SAR) acquisitions. UW-Scat was comprised of two fully polarimetric frequency modulated continuous wave (FMCW) radars with centre frequencies of 9.6 and 17.2 GHz (X- and Ku-bands, respectively). SAR observations included fine-beam fully polarimetric RADARSAT-2 acquisitions, obtained coincident to UW-Scat observations during 2009-2010. Three experiments were conducted to characterize and evaluate the backscatter signatures from snow-covered freshwater ice coincident to in-situ snow and ice observations. To better understand the winter backscatter (σ°) evolution of snow covered ice, three unique ice cover scenarios were observed and simulated using a bubbled ice σ° model. The range resolution of UW-SCAT provided separation of microwave interaction at the snow/ice interface (P1), and within the ice volume (P2). Ice cores extracted at the end of the observation period indicated that a considerable σ° increase at P2 of approximately 10 – 12 decibels (dB) HH/VV at X- and Ku-band occurred coincident to the timing of tubular bubble development in the ice. Similarly, complexity of the ice surface (high density micro-bubbles and snow ice) resulted in increased P1 σ° at X- and Ku-band at a magnitude of approximately 7 dB. P1 observations also indicated that Ku-band was sensitive to snowpack overlying lake ice, with σ° exhibiting a 5 (6) dB drop for VV (HH) when ~ 60 mm SWE is removed from the scatterometer field of view. Observations indicate that X-band was insensitive to changes in overlying snowpack within the field of view. A bubbled ice σ° model was developed using the dense medium radiative transfer theory under the Quasi-Crystalline Approximation (DMRT-QCA), which treated bubbles as spherical inclusions within the ice volume. Results obtained from the simulations demonstrated the capability of the DMRT model to simulate the overall magnitude of observed σ° using in-situ snow and ice measurements as input. This study improved understanding of microwave interaction with bubble inclusions incorporated at the ice surface or within the volume. The UW-Scat winter time series was then used to derive ice thickness under the assumption of interactions in range occurring at the ice-snow and ice-water interface. Once adjusted for the refractive index of ice and slant range, the distance between peak returns agreed with in-situ ice thickness observations. Ice thicknesses were derived from the distance of peak returns in range acquired in off-nadir incidence angle range 21 - 60°. Derived ice thicknesses were compared to in-situ measurements provided by the SWIP and CLIMo. Median ice thicknesses derived using UW-Scat X- and Ku-band observations agreed well with in-situ measurements (RMSE = 0.053 and 0.045 m), SWIP (RMSE = 0.082 and 0.088 m) and Canadian Lake Ice Model (CLIMo) simulations using 25% of terrestrial snowpack scenario (RMSE = 0.082 and 0.079), respectively. With the launch of fully polarimetric active microwave satellites and upcoming RADARSAT Constellation Mission (RCM), the utility of polarimetric measurements was observed for freshwater bubbled ice to further investigate scattering mechanisms identified by UW-Scat. The 2009-2010 time series of UW-Scat and RADARSAT-2 (C-band) fully polarimetric observations coincident to in-situ snow and ice measurements were acquired to identify the dominant scattering mechanism in bubbled freshwater lake ice. Backscatter time series at all frequencies show increases from the ice-water interface prior to the inclusion of tubular bubbles in the ice column based on in-situ observations, indicating scattering mechanisms independent of double-bounce scatter, contrary to the longstanding hypothesis of double-bounce scatter off tubular bubbles and the ice-water interface. The co-polarized phase difference of interactions at the ice-water interface from both UW-Scat and SAR observations were centred at 0°, indicating a scattering regime other than double bounce. A Yamaguchi three-component decomposition of the time series suggested the dominant scattering mechanism to be single-bounce off the ice-water interface with appreciable surface roughness or preferentially oriented facets. Overall, this work provided new insight into the scattering sources and mechanisms within snow-covered freshwater lake ice containing spherical and tubular bubbles.