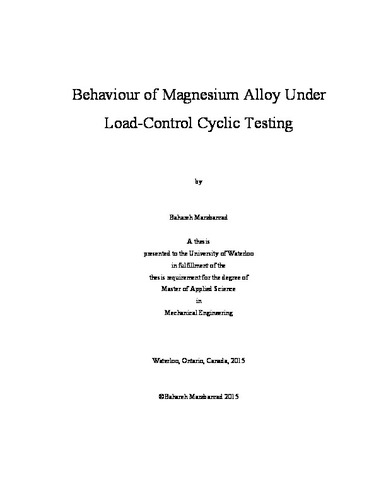 The characterization of material fatigue behaviour is crucial in the design of mechanical components. Magnesium alloys, particularly wrought magnesium alloys, are one of the most interesting materials for mechanical components due to their superior physical and mechanical properties and have, therefore, been studied extensively. Primarily, evaluations of the fatigue characteristics of wrought magnesium alloys have been conducted under cyclic stress- and strain-control conditions. However, many engineering components are subjected to cyclic bending moments or load-control cyclic conditions. These conditions can be provided by a rotating bending test (RBT), which is usually employed to extract stress versus number of cycles until failure of the sample (S-N curve). On the other hand, the S-N curve is not sufficient to evaluate cyclic deformations of the material, especially for low-cycle fatigue regimes. To estimate the fatigue behaviour of the material, it is necessary to obtain stress and strain responses of the material under different range of bending moments in load-control condition. To date, however, the evolution of hysteresis curves during rotating bending experiments for asymmetric materials such as magnesium alloys has not been reported in the literature. In the present study, for the first time, Fiber Bragg Grating (FBG) sensors were employed to measure the strain on AZ31B extrusion samples during RBT. First, the accuracy of strain measurement by the FBG sensor in the elastic and plastic regimes was investigated by comparing the FBG measured strain with that obtained by a standard extensometer during uniaxial pull-push test. Results confirmed that the FBG sensor was able to measure the strain up to 1.3%, accurately. In the next step, the strains of the specimens were measured under different bending moments of 2.5, 5, 6.5 Nm, during RBT. Based on these experiments, the strain amplitude of the samples was decreased with increasing the number of cycles in plastic regime until the sample was stabilized, however the strain response of the material under bending moment of 2.5 (in elastic regime) remained constant during the test. To analyze applied stresses to the sample, particularly in the plastic deformation range, the proposed Variable Material Property (VMP) method was employed. In this model, the RBT was simulated by a fixed beam problem that was under alternative loading, and the stress-strain responses of the sample were predicted. Using this simulation method, the hysteresis loops of two critical top and bottom elements of the sample cross-section under different bending moments were obtained. Finally, the strain of the sample during rotating bending, which was measured by the embedded FBG sensor, was replaced with the strains obtained from the modeling by fitting a mapping function. The hysteresis obtained from combination of the modeling results and FBG experiments was relatively precise. To verify this claim, the stresses of the hysteresis loops were compared with the stresses obtained from the proposed strain-control pull-push tests in which, the strain on the sample was adjusted to be equal to the strain measured by the FBG sensor. The results of this test demonstrated that the stresses of the combined VMP and FBG hysteresis loops have good compatibility with the stress responses of the experiment. Therefore, the accuracy of the cyclic deformation hysteresis obtained using modeling and experimental results were confirmed under load-control conditions. Moreover, the fatigue life of the sample was calculated using the obtained hysteresis curve based on the energy approach. The predicted fatigue life of the AZ31B extrusion samples was in good agreement with published experimental data.