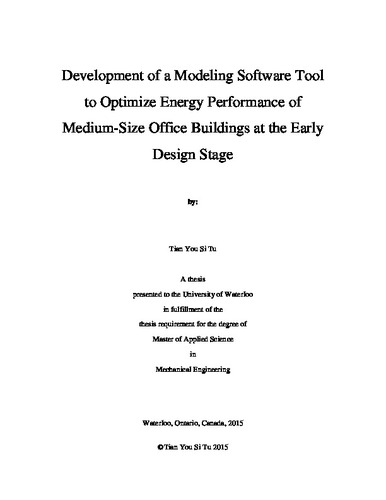 Building energy modeling is an important tool for low-energy building design. An energy modeling tool is used to estimate energy consumption, peak heating and cooling load for sizing mechanical equipment, and to demonstrate compliance with building codes and standards. Modeling tools are designed to evaluate building performance associated with a set of building specifications but it is difficult to predict building loads at the early design stage because most design features have not yet been specified. In addition, the designer must have experience and insight regarding the design features that most strongly influence building performance. In this thesis, a new modeling tool, entitled Excel-Based Load Model (EBLM), was developed to aid designers in the early design stage to estimate building loads, and to size/specify the building components that most strongly affect the overall building performance. EBLM is an open source tool that uses Excel as the calculation engine, creating the advantage that users may modify the program according to their individual interests or project needs. EBLM is a single zone modeling tool that consists of three parts: inputs, load calculations, and outputs. The load calculations use the conduction time series (CTS) and radiant time series (RTS) methods to account for the thermal storage effect that delays cooling load. One of the unique features of EBLM is the ability to model slat-type operable shading systems. Users can specify one of three shading control strategies. Results can be presented in hourly, monthly, or annual format. The program also outputs the percentage of building loads for each building component in figures and tables. The EBLM has been validated with the commonly used eQUEST model; the difference is about 8% for the sum of all building loads. EBLM was also used to perform a series of simulations to examine the influence of building components that are considered to be important. The major conclusions were: • High performance building specifications significantly reduce building loads, and energy-efficient mechanical equipment could further reduce energy consumption. • An outdoor operable shading system can be used to effectively block excess solar gain and to help reduce cooling load in summer months, but can also be operated to allow solar gain and to reduce heating load in winter months. • Using an outdoor temperature shading control strategy, low solar heat gain coefficient (SHGC) windows with an outdoor operable shading system have better energy performance than high SHGC windows with outdoor operable shading system in Toronto. • As found in many studies, the window-to-wall ratio (WWR) has a significant influence on building performance. Lower WWR can minimize both the conductive heat transfer and alleviate excess solar gain. • Lowering the WWR from 40% to 30% has a similar effect on energy use as deploying outdoor operable shading system.