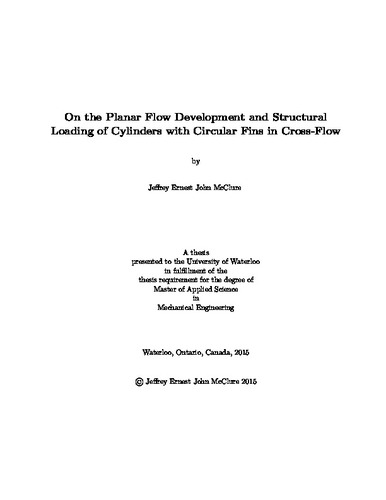 Finned cylinders are commonly encountered in the design of heat exchangers. Critical to the design and performance of a heat exchanger are the mean and fluctuating loading on the tubes, as they relate to pressure losses across the model and may lead to structural vibrations. The loading characteristics are related to the vortex shedding phenomena in the wakes of finned tubes, which motivates the need to understand their relationship in detail. The flow development and structural loading characteristics of cylinders with equispaced circular fins were studied experimentally in the University of Waterloo water flume facility. Finned cylinders of diameter ratio Df/D = 2.0, fin thickness ratio t/D = 0.028 and range of fin pitch ratios 0.083 ≤ c/D ≤ 1.0 were investigated using Particle Image Velocimetry (PIV), Laser Doppler Velocimetry (LDV), and force balance measurements. The Reynolds number ranged from ReDeff = 1020-2040 based on the effective diameter of the models, corresponding to the shear layer transition turbulent shedding regime. For c/D = 1.0, the vortex development resembles that of a uniform base cylinder, besides a region of affected flow near each fin. Further reduction of c/D results in similar scales of vortex formation, but with increased unsteady flapping of the separated shear layers. Following that, for c/D ≤ 0.083, boundary layer coalescence between the fins leads to the flow redirection and separation at the fin diameter. The generation of lateral vorticity between the fins leads to the progressive weakening of the spanwise shear layers with decreasing c/D. However, the bleeding of low-energy fluid into the near wake from the viscous regions between the fins has a stabilizing effect on the mixing of vorticity during vortex formation, thereby augmenting the structure of turbulence in the wake and inducing stronger wake vortex shedding. Linear increases in the mean drag with increasing fin density are attributed to the independent viscous shear contributions introduced by each finned surface, and the fall off of the linear trend with high fin density is due to the loss of this independence with lateral boundary layer coalescence. The RMS of the fluctuating lift is shown to increase initially for decreasing c/D → 0.33, as the wake vortices increase in strength and flow unsteadiness increases near the cylinder surface. However, the fluctuating lift is severely diminished for low c/D = 0.083, with vortex formation displaced much further downstream, despite exhibiting stronger wake vortices. The vortex shedding frequency is shown to decrease with decreasing c/D. A modification of the definition of the Strouhal number based on the cylinders effective diameter is proposed which incorporates Reynolds numbers effects associated with the differences in the added flow blockage created by the boundary layers developing on the fin surfaces. This definition is found to universally collapse the shedding frequency data in the study and literature onto a constant StDeff* ≈ 0.2 with little scatter.