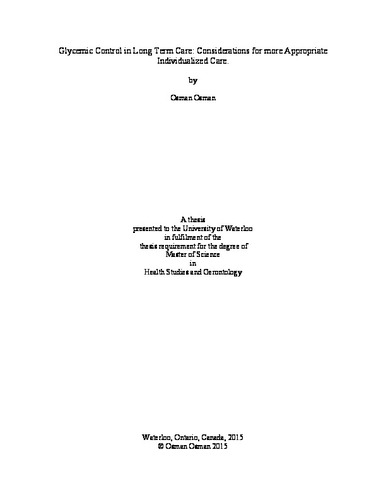 Diabetes, specifically type 2 diabetes (T2DM), is a metabolic disease that is highly correlated with increasing age. Diabetes is prevalent in about a quarter of residents in LTC, where its management in elderly residents is complicated by the presence of multiple comorbidities, a high level of vulnerability and risk of death. Despite this, evidence for the benefit of tight blood glucose control in preventing cardiovascular and other geriatric outcomes in the frail elderly is inconclusive. Although many clinical practice guidelines (CPG) call for more relaxed blood glucose control in the frail elderly, evidence for relaxed blood glucose targets is mostly based on expert consensus, resulting in variable recommendations among different CPG’s. Furthermore, the current literature suggests that blood glucose values are generally below the recommended lower threshold (an A1C <7.0%) in LTC residents. However, it is not conclusive as to whether lower A1C values are a reflection of the clinical characteristics of the frail elderly in LTC, or a result of stringent blood glucose control. Finally, research in Canada regarding the management of diabetes in LTC homes is greatly lacking. This study conducted a mixed method design (convergent parallel design) in order to explore the current practices, processes, and opinions of blood glucose control in Ontario LTC homes. This study conducted a provincial survey exploring opinions of blood glucose control and treatment among LTC medical directors and attending physicians across Ontario. Alongside the survey, this study also conducted in-depth phone interviews with medical directors, attending physicians, and nurses of varying educational and managerial positions, in order to explore the experiences of managing blood glucose in LTC residents with diabetes. The findings of this study illustrate the growing appreciation of less stringent blood glucose control in elderly LTC residents among LTC physicians and nurses. Frailty, a limited life expectancy and dementia, are common factors that promote less stringent blood glucose control. However, there is still variance in what blood glucose targets physicians are willing to consider. Furthermore, there appears to be two approaches to managing hyperglycemia in LTC. Whereas some physicians are mainly concerned with preventing acute symptoms of hyperglycemia in LTC residents with a less stringent approach, other physicians are of the opinion that hyperglycemia is still related to multiple short term illnesses and complications in LTC residents, and are less willing to consider the more extreme opinions of less stringent control that exist. Barriers to optimal blood glucose control within LTC homes include the presence of dementia and managing a resident’s diet, including unpredictable intake and poor diet choices by the resident or family. Physicians limited their consideration of sliding scale and complex insulin regimens in LTC residents when possible. However, attempts to reduce monitoring parameters was complicated by the presence of unstable blood glucose levels as a result of frailty, dementia, and variable diet intake. The study also identified the role for increased communication between health professionals within LTC and a need for continuing education, especially for the nursing staff, in order to facilitate optimal management. Future research should explore the perceptions and experiences of other key professionals and individuals that are essential to informing the experiences of blood glucose control and overall diabetes management in LTC. Studies should also address the current practices of diabetes management in LTC residents, in order to highlight any potential differences between what physicians and nurses report versus actual practice. Finally, future studies should explore the effect of hyperglycemia on short term complications and geriatric outcomes, in order to better inform management that improves the quality of life of residents.