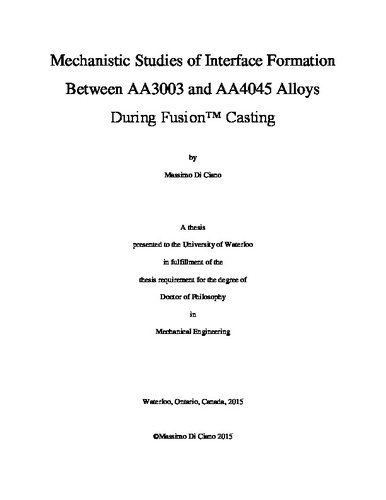 Fusion™ casting is a unique Direct Chill (DC) continuous casting process whereby two different alloys can be cast simultaneously, producing a laminated aluminum ingot. Empirically derived operating ranges exist for Fusion™ casting of specific alloy combinations. When followed, the resulting ingots are of high quality. Despite this, oxide entrainment at the core-clad interface as well as inconsistent clad alloy thickness have reduced product yields. The objective of this thesis was to study the interface formation process in Fusion™ casting, with special emphasis on determining the mechanisms at play. A more fundamental understanding of the process can potentially lead to improvements in Fusion™ ingot yields and the ability to cast other alloy combinations which are currently not used to make Fusion™ ingots. Both experimental and mathematical modelling methodologies were employed to examine the Fusion™ casting of AA3003-core/AA4045-clad ingots. Tests were conducted using an analog/immersion test system designed and built at the University of Waterloo. The immersion tests provided a means to examine wetting and bonding between dissimilar aluminum alloys under closely controlled conditions. Results from these analog/immersion tests showed that the AA3003 sample oxide was permeable and good wetting occurred with the AA4045 melt provided an adequately inert atmosphere is maintained in the furnace during sample immersion into the melt. Also, the addition of small amounts of Mg to the AA4045 melt was shown to further facilitate the wetting and interface formation process. In parallel, lab-scale Fusion™ casting plant trials were conducted at the Novelis Global Research and Technology Centre in Kingston, Ontario. Simulations of these experiments were performed to determine the steady-state conditions during Fusion™ casting. Other observations and measurements made during the Fusion™ casting experiments included: oxide motion measurements, AA3003 surface characterization, metallography of as-cast interfaces, and mechanical testing of as-cast interfaces. It was found that during the lab-scale Fusion™ casting trials, AA4045-clad successfully wets and creates a metallurgical and mechanically sound interface with the AA3003-core shell . Wetting of the interface is facilitated by the oxide motion on the AA4045 sump and the AA3003 sump, providing clean contact between the AA4045 liquid sump and the AA3003 solid shell. Although oxides are present on the AA3003 shell surface, they do not appear to be an intrinsic barrier to wetting and bond formation. It is postulated that wetting and bond formation is a result of discrete penetration of AA4045 liquid at AA3003 oxide defect sites followed by dissolution of the underlying solid AA3003 by liquid AA4045 and subsequent bridging between discrete penetration sites. While remelting of the AA3003 surface was not necessary to obtain a sound Fusion™ cast interface spot exudation on the AA3003 chill cast surface during reheating and partial remelting of the shell did improve the wetting and bonding process as it provided macroscopic oxide defects along the chill cast surface due to local deformation and fracture of the oxide that facilitated penetration of the AA4045 liquid through the oxide and into the underlying AA3003 solid shell. Based on the results of this study, it is recommended that further improvements in FusionTM casting yield and interface quality can be made by 1) reducing mold heat extraction and cooling at the sides of the ingot, 2) using a wiper blade in the AA4045 melt close to the AA3003 interface to reduce AA4045 oxide incursion into the interface, 3) providing an inert gas shield at the AA3003/AA4045 melt interface and 4) adding small amounts of Mg to the AA4045 melt.