Building Fiction: The Architecture of Narrative in Harry Potter 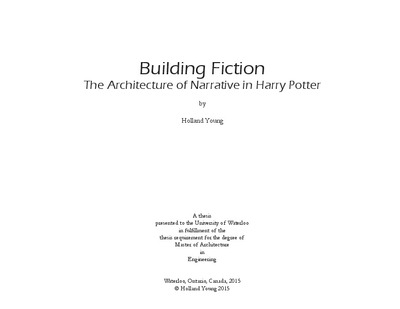 A person does not experience architecture as a purely physical construct. Lived space transcends mere materiality, as each individual experiences the world outside oneself through the unique filter of one’s own mind. In this way, architecture becomes subjective: influenced by the memories and imagination of its viewers, who use the physical realm as a take-off point from which to shape their own environments within the context of their respective psyches. Fictional architecture (or the architecture of narrative) uses this same concept to build the environments in film and literature; although, in these cases, the cues given to an audience are images, sounds and/or words rather than three-dimensional space. The term ‘architecture of narrative’, as used in this thesis, refers to the architecture of books and films which must rely on imaginary environments. This type of architecture is free of the strict rules and regulations which govern built form in the corporeal world; however, in order for an audience to relate to and engage with these imaginary environments, it must still employ boundaries which give the fictional realm stability, coherence and continuity. When these boundaries are applied successfully, the viewer experiences an immersion in narrative space which generates memories of place which are comparable to that of a physical environment. This thesis seeks to explore how storytellers use overlapping real and fictional architectural environments in order to propel narrative and precipitate an immersive experience for an audience, using the acclaimed Harry Potter series as the primary vehicle for exploration. The study will review the narrative and architectural typologies, physical settings and imagined spaces used to connect the viewer to the narrative’s highly detailed world. This examination will attempt to determine the role architecture plays in the Harry Potter universe, comment on the ways fictional environments can be used to reframe an audience’s existing notions of the corporeal world, and suggest how architects might learn from the strategies used to build these compelling internal spaces and apply them to their practice.