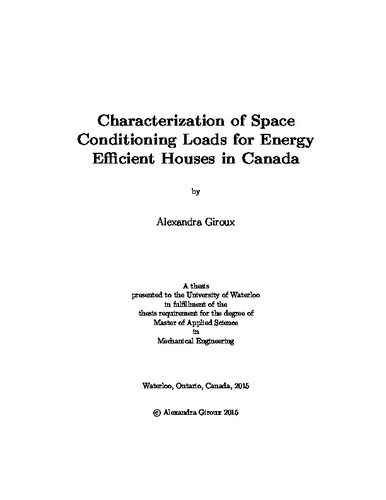 This thesis details the development of a graphical method of presenting equipment loads within a house, allowing the loads for an entire year to be presented on a psychrometric chart. These charts are called rosettes. This graphical method allows the magnitude and distribution of both the sensible and latent loads to be examined, and for changes throughout the year to be examined. The rosettes can be used to determine whether or not conventional HVAC equipment is the best equipment for maintaining occupant comfort within the house, or if different equipment must be considered. This is of particular importance in highly energy efficient houses. The rosettes also allow the split between the sensible and latent loads to be examined. In conventional houses, the loads are dominated by sensible loads, especially sensible heating. However, it is already known that energy efficient houses require supplemental ventilation to avoid the development of moisture problems within the house. It was expected that in a highly insulated house with both heat and moisture control equipment, the loads will be dominated instead by latent loads instead of sensible. In such houses, it was expected that supplemental moisture control equipment may be required. The rosettes were used to determine if this was indeed the case. Simulations of six different houses were run using the program ESP-r, and the results were used to create rosettes for each simulation. The simulations examined different constructions, an increased number of occupants, the addition of active shading control, and the use of an alternative control scheme. The sensible and latent loads for each case are examined and discussed. Rosettes produced from this study showed that improving the standard of construction has a significant effect on the equipment loads. However, the rosettes did not show a dramatic shift from sensibly dominated loads to latent dominated loads. The results show that changing the occupancy has the greatest effect on the equipment loads of the houses simulated in this study. The rosettes also show that while the shift from sensible loads to latent loads is not as dramatic as expected, there was a significant increase in the sensible cooling requirements.