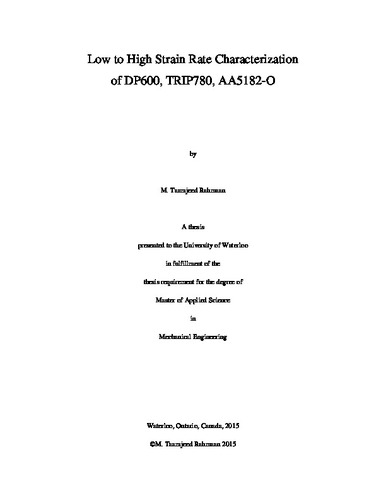 Advanced High Strength Steels (AHSS) and aluminum alloys are currently of great interest in the automotive industry due to their superior strength-to-weight ratio and good formability. This research work presents the results of an investigation into the rate sensitivity of DP600, TRIP780, and AA5182-O, three sheet alloys that are viewed as candidates for automotive structural applications to reduce vehicle weight. The effect of strain rate on both the flow stress and anisotropy characteristics was examined. Uniaxial tensile tests are the standard method used to characterize the strain-rate dependent mechanical properties of sheet metals. Tensile tests were performed at room temperature under conditions ranging from quasi-static to high strain rate loading on the three alloys along three orientations (0°, 45°, and 90°) with respect to the rolling direction. An Instron servo-hydraulic testing machine, a Hydraulic Intermediate Strain Rate (HISR) apparatus, and a split-Hopkinson tensile bar apparatus were used for the low, intermediate, and high strain rate experiments, respectively. The longitudinal and width strains were measured with a biaxial extensometer for the quasi-static tests and using Digital Image Correlation (DIC) methods for the elevated strain rate tests. DP600 and TRIP780 showed moderate rate sensitivity while AA5182-O showed relatively low or even negative rate sensitivity. The Portevin–Le Châtelier (PLC) effect was observed in AA5182-O up to a strain rate of 1 s-1. The PLC effect was considered the cause of the negative rate sensitivity observed in the material. The hardening behavior of the TRIP780 at a strain rate of 1000 s-1 differed from that observed at lower rates of strain. This difference is attributed to the effect of the adiabatic temperature rise on the transformation induced plasticity (TRIP) effect. An increase in strain rate from 0.001 to 100 s-1 led to an average increase of 85 and 110 MPa in engineering stress (at 0.10 engineering strain) for all three sheet orientations for DP600 and TRIP780, respectively. The degree of anisotropy, characterized in terms of the Lankford coefficients and the variation in flow stress with material orientation, was relatively insensitive to strain rate for all three alloys. A primary objective of this work was to develop rate-dependent constitutive models suitable for metal forming and vehicle crash analysis. A number of constitutive fits, including Johnson-Cook, Zerilli-Armstrong, and a Voce hardening law with different strain rate functions, were considered. The Voce–Modified (VM) model with a combined logarithmic and exponential type strain rate term was able to capture the strain rate dependence of all three materials (along all three material directions) up to the end of uniform elongation. The one exception to this outcome was the TRIP780 behavior at a strain rate of 1000 s-1. The proposed Voce-Modified constitutive model was implemented within finite element simulations of the tensile experiments. The model provided good predictions of hardening response up until the onset of necking. A post-necking hardening response was added to the VM model (referred to as the VM-extrapolated or VME model) and calibrated to the post-necking measured response, providing accurate simulations of the tensile behavior well into the post-necking regime.