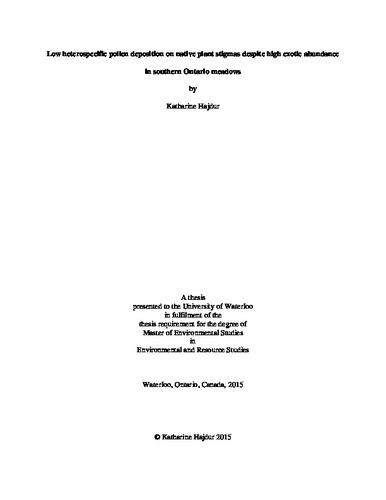 In southern Ontario many meadow remnants are found within protected areas, including Conservation Authorities. These meadows occupy a fraction of their former area and are typically dominated by exotic species, yet they are an important ecological component within the landscape matrix. Meadows provide habitat and forage resources for many pollinator species but the relationship between pollen deposition and the presence of exotic/native species is currently unknown. This study aimed to determine the composition and quantity of pollen deposition on stigmas of exotic and native plants species in southern Ontario meadows to establish a baseline for future meadow pollen deposition studies. Furthermore, this study suggests monitoring programs and restoration techniques to help continually assess plant-pollinator interactions within Ontario’s Conservation Authorities. Pollen deposition and pollinator visits were assessed from June-September 2011 in four meadows located in the Credit Valley Conservation Authority (2) and Toronto and Region Conservation Authority (2). Transects and quadrats were utilized for stigma collection, pollinator observations, and percent plant cover, while the Shannon Weiner Diversity Index and Pielou's Evenness Index were used to assess the diversity of deposited pollen. Exotic species represented 68 % of plants sampled. While native plant stigmas were chiefly deposited with conspecific pollen they only represented 32 % of the species within meadows. The highest average pollen diversity (1.03 ± 0.3SE) was observed on exotic Cirsium species stigmas, while Hypericum perforatum and Cirsium species, both exotic, demonstrated significantly different diversity indices (P < 0.05) due to heterospecific pollen transfer. Potentilla recta and Melilotus alba were only observed at one site, yet had high pollen diversity (1.16 and 0.97, respectively). The heterospecific pollen found on Potentilla recta, Melilotus alba, and Cirsium species stigmas originated from other exotic species rather than native species. These results indicate that although there is a high abundance of exotic species in these meadows, the pollination, and thus reproductive success, of native species is likely not impeded by heterospecific pollen transfer. Given the high number of exotic species found within meadows, it is unlikely that these meadows can be restored to an entirely native ecosystem and the lack of heterospecific pollen deposition found on native plant stigmas suggests that native plant reproduction is not currently impeded. Attempts to reduce exotic species’ populations in an intense and rapid manner would not only be expensive and likely futile but may also cause pollinator population crashes unless mass plantings (restoration) of native plants and their entire soil community were successful. One alternative is to take a laddered approach of targeting those exotic plants which are hyper-abundant and/or which disrupt ecosystem services and gradually reducing their numbers by supplanting them with native species with similar floral characteristics to avoid a pollinator population crash. In southern Ontario’s landscape, there should be a conscious effort to maintain a matrix (a sere of meadows, shrublands, and multi-aged forests) to support a diversity of flora and fauna.