Strengthening Resilience and Food Security Through the Development of Agroforestry in Post-War Kilinochchi, Sri Lanka 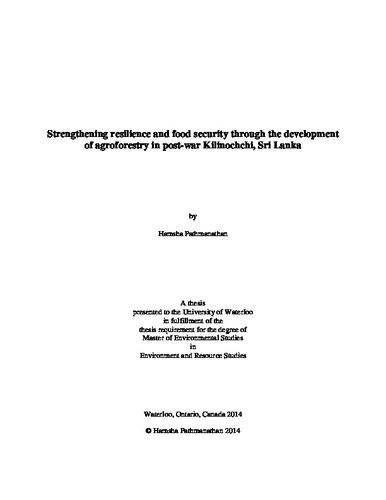 Kilinochchi is the largest agrarian region found in Sri Lanka. It is an area that has been greatly affected by three decades of civil war, which led to the mass disruption of lives and livelihoods within this region. It is estimated that over 300 000 individuals were displaced during the years of war, and returning only now to their places of origin. Inadequate land policies along with the lack of transparency relating to land administration have made inhabitants within the Kilinochchi district apprehensive about their land ownership, and the security of their livelihoods. Farming is the dominant form of livelihood within Kilinochchi. Farmers in this region primarily cultivated paddy fields using extensive amounts of mineral fertilizers, pesticides, and herbicides. Usage of agrochemicals deviates from their traditional forms of cultivation prior to the onset of conflict between the separatist Liberation Tigers of Tamil Eelam (LTTE) and the Sri Lankan army. This extensive use of agrochemicals within the region coupled with severe droughts has contributed to the loss of nutrient resources in the soil, and has diminished food security within the region. Sustainable land-use systems such as agroforestry can help to decrease farmer dependency on agrochemicals for bountiful harvests, improve soil fertility and soil water retention, and also increase food security within rural communities found in the district. This study conducted a baseline survey to determine soil physical and chemical properties in order to implement agroforestry systems in Kilinochchi’s dry zone climate. Implementation of the recommended agroforestry model is an attempt to enhance livelihoods and food security for resource-poor farmers and their families living in the region. The results indicated that the soils within the research site were low in soil organic carbon, total nitrogen, organic matter, and have near neutral to alkaline soils, and slightly compacted soils, which signify low levels of fertility. The vegetation survey indicated only 17 tree species existed on the research site. The low number of tree species at the research site is evidence of the massive deforestation events that occurred during three decades of civil war. In addition, a qualitative study was conducted with farmers living on land surrounding the research site in the villages of Kanakambikaikulam, Thiruvaiyaar, Bharathipuram, and Malaiyaalapuram. The interviews revealed a wide variety of factors and constraints that affected land management practices and strained farmers’ livelihoods, all of which impacted food security in Kilinochchi. These constraints included limited or no access to agricultural inputs (seeds and capital), lack of land tenure, water scarcity and poor soil fertility, inability to hire laborers due to monetary limitations, inaccessible markets, and external exports competing with local markets. There is presently no available information on the potential of agroforestry practices to ensure long-term food security within the region of Kilinochchi. There is also very little knowledge about integrating the rich traditional ecological knowledge (TEK) of the farmers with agroforestry practices. The collected data aims to fill these gaps in knowledge. Essentially, the results from the baseline soil survey will be used to design a model agroforestry system as a recommendation to help regenerate soil fertility, and help farmers create sustainable agro-ecosystem management plans. The model agroforestry system will be designed to increase crop yield without compromising the integrity of the agricultural fields for long-term food security and livelihoods in Kilinochchi, Sri Lanka.