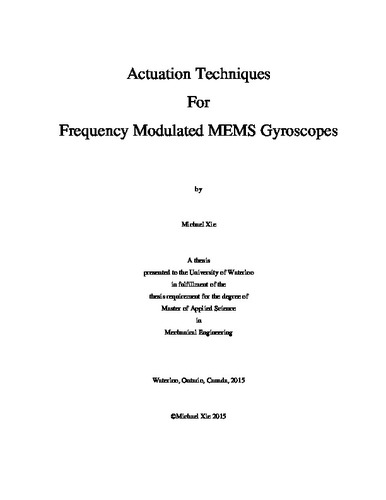 This thesis focuses on the design and implementation of an analog actuation circuit for a novel frequency-modulated MEMS gyroscope. The gyroscope detects angular rotations as the difference between the natural frequencies of two closely spaced drive and sense modes rather than the magnitude of displacement in the sense direction. Furthermore, the actuation system features a resonant drive (RLC) circuit that amplifies the gyroscope actuation signal. The input to the circuit is an amplitude-modulated (AM) signal composed of a carrier signal modulated with a base signal that excites the gyroscope drive mode. The carrier frequency corresponds to the electrical resonance frequency of the drive circuit. This research develops techniques for the stabilization of the circuit output through close loop feedback. First, we attempt to increase the signal-to-noise ratio of the modulating signal by implementing feedback and feedforward control loops (AGC). The feedback controller closes the loop on the entire conditioning circuit for the modulating signal while the feedforward controller acts on the input signal to the conditioning circuit. The feedforward and the feedback controllers derive an error signal representing the signal noise by comparing the input and output signal, respectively, with a reference signal. However, we find that the breadboard circuit implementations of our control strategies performed similar to a baseline uncontrolled function generator due to the additional noise input from the breadboard and the additional components used to implement the controller, such as the amplifiers. Next, we develop a single-harmonic amplitude-stabilized actuation scheme for the gyroscope to minimize multi-frequency excitations and reduce amplitude fluctuations to improve the gyroscope precision. A low pass filter is applied to the AM signal to obtain a single sideband full carrier (SSB-FC) signal. Since the capacitance of RLC circuit changes due to the vibration of the gyroscope, this variation in capacitance causes a shift in the frequency response of the RLC circuit, resulting in variation in the circuit gain. Three feedback control topologies are implemented to stabilize the signal by first detecting the change in signal level, and then amplifying or attenuating the signal level in order to maintain a constant gyroscope actuation level. The control strategy with the best performance involves feeding back the RMS of the output signal to control the amplitude of the carrier signal and feeding back the average of the output signal’s envelope to control the bias level of the modulating signal. Using control this strategy, the peak magnitude at the carrier frequency dropped approximately 2% as the capacitance is varied from 15 pF to 16 pF, awhile the other two control strategies changed 9% and 6%.