Singing with Moses and the Lamb: Social Memory and Radical Discipleship in John’s Apocalypse 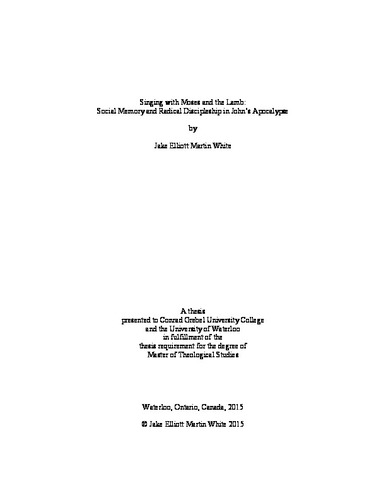 The Apocalypse reads as a kind of “discipleship manual” for the ekklesiai living in Asia Minor under Roman administration. It calls for followers of the Lamb to reject easy compliance with the world of empire, and to embrace instead a costly alternative of witness and resistance. This study applies learnings from social memory theory to illuminate the political struggle in the Apocalypse: it considers how memory functions in antiquity to build a shared narrative of “Romanness;” how the Apocalypse’s strategy of drawing on Hebrew scriptures articulates a “counter-discourse” to Roman hegemony; how worship recalls this distinctive memory and re-narrates the world through it; and finally, how memory functions in the important imperative to “remember and repent” (2:5, 3:3). The study concludes that John is quite aware of the dynamics of power at work in his social world and memory is one basis on which he confronts this power. Through memory, the Apocalypse nurtures an alternative way of seeing the world, forges an alternative identity to “being Roman,” and animates an alternative life-practice. Deep memory is crucial for the ekklesiai to embody the way of the Lamb as a sustained alternative to ordinary civic life in the empire.