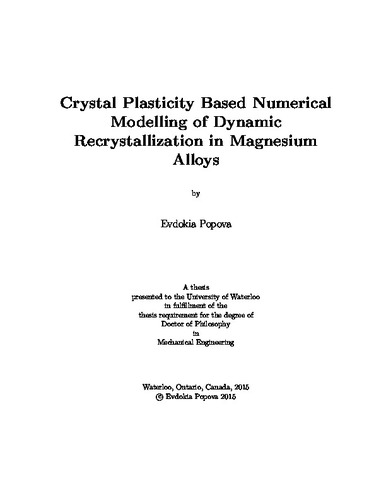 The automotive industry has not been able to take full advantage of the lightweight of magnesium, or its alloys, because of its reduced formability at room temperature. In order to enhance the workability of magnesium and restore its ductility, elevated temperature forming needs to be performed. Hot working of metallic alloys is often accompanied by dynamic recrystallization (DRX), whereby the deforming grain structure is partially or completely replaced by new defect free grains during deformation. Dynamic recrystallization allows the nal microstructure, as well as the properties of the material (grain size, texture strength), to be controlled. Therefore, DRX can be used as a tool to design a materials microstructure. Because it would be advantageous to be able to redesign the material properties of magnesium, particularly for the automotive industry, this work takes a step towards such an outcome by presenting a new model that predicts DRX in magnesium. The model predicts DRX in magnesium alloys by using a crystal plasticity based nite element model (CPFEM) coupled with a probabilistic cellular automata model (CA). The CPFEM employs microstructural information obtained by electron backscatter di raction (EBSD) as input and computes dislocation density evolution corresponding to the active deformation modes. Because DRX proceeds via nucleation of new grains and their subsequent growth, a nucleation criterion based on the local mismatch in dislocation density is employed. Subgrains formed during deformation constitute the nuclei, and only those subgrains that have a boundary with misorientation above a threshold value can grow. The probabilistic CA is used to identify successful nucleation sites. The growth of viable nuclei depends on the di erence in the stored energy of the nucleus and the stored energy of the surrounding matrix. As such, the model is developed to predict the texture of magnesium alloys that have experienced dynamic recrystallization solely from the initial texture and the applied strain path. The model is then extended to include deformation twinning and it can then be used to study its e ect on the evolution of DRX. Deformation twinning is activated when the c-axis of hexagonal close packed (HCP) crystal is under a tensile load and leads to the reorientation of the crystal by speci c angle. However, rather than including both contraction and extension twins, only extension twins are considered in the model due to their important role during deformation at room temperature and above. Extension twins grow during deformation at ambient temperatures and their in uence on the texture formation at elevated temperatures is not well studied. Contraction twins were not included in the model because they are known to have negligible e ect on the nal texture of magnesium alloys due to their relatively low thickness and inability to grow. In order to investigate the e ect of the extension twins on DRX evolution, a reorientation of the entire element is performed to the dominant twin orientation before DRX is initiated. The approach is similar to the PTR scheme (predominant twin reorientation). To validate the capability of the developed model, rst, tensile simulations are performed on rolled AZ31 commercial magnesium alloy at 300 C. The tensile test along the rolling direction is a slip dominated deformation. The softening behaviour as well as the nal texture are compared with available experimental data. Then, in order to activate twinning, the compression test is simulated on the extruded AZ31 alloy along extrusion direction (ED). Various temperatures are simulated to investigate the e ect of the twinning at higher temperatures. Finally, the parametric study is accomplished to examine the e ect of the di erent parameters in the model on the evolution of DRX. The simulations with the new model show excellent agreement with experiments presented in the literature.