Investigating Mechanical Interactions of Cells with Their Environment 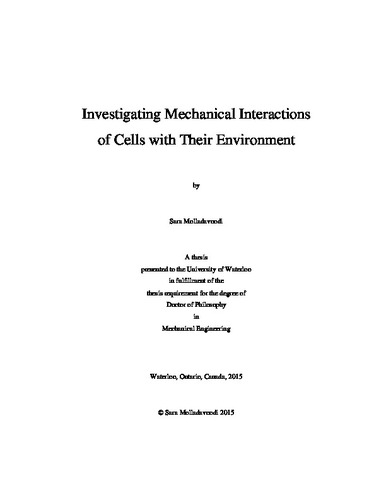 Recent studies have shown that cells not only respond to chemical signals such as growth factors or chemoattractants, but they are also capable of detecting mechanical stimuli and responding to them. The process during which these mechanical stimuli are detected and transferred to chemical signals, that cells can process, is called mechanotransduction. The mechanical stimuli that can affect cells can be either an external stimulus applied to cells, such as shear flow or cyclic compression and tension, or they can be linked to the mechanical properties of their substrates. One of the mechanical properties of a substrate that can affect cellular behavior is known to be stiffness, mostly measured by elastic modulus. Stiffness influences a wide variety of cellular behaviour such as cell shape, adhesion to substrate, proliferation, and differentiation. Anchorage dependent cells are in direct contact with their environment, which then leads to complicated interactions. These interactions can be both biological and mechanical. In the current research, the mechanical interactions are often called the “mechanical responses” of cells. For anchorage-dependent migrating cells, mechanical responses can be the substrate deformations induced by the forces generated by cells also called cell traction forces. These mechanical responses can be studied in three levels of complexity. The first level is when cells are cultured on a 2D matrix and responses are also studied in 2D. The second level of complexity is when cells are cultured on a 2D matrix and the biological behaviour of cells, such as growth or migration, is studied in 2D, however, the mechanical responses of cells are studied in 3D, meaning that not only in plane deformation and forces are studied, but out of plane ones are also assessed. The third level of complexity is when cells are cultured inside a 3D matrix and both biological responses and mechanical responses are studied in 3D. In the current research, the second level of complexity is chosen. After testing different types of materials, polyacrylamide (PAAm) was chosen as the model biomaterial. Following mechanical characterization of PAAm samples, substrates were prepared with three different elastic moduli. Both biological responses and mechanical responses of human corneal epithelial cells (HCECs) were studied. For biological responses, cell viability, activation, adhesion molecules, apoptosis and migration behaviour were studied. For mechanical responses, confocal microscopy in junction with image processing technique, digital volume correlation (DVC), was used to measure cell induced deformations. It was found that elastic modulus, as a mechanical stimulus, affects not only biological behaviour of cells, but also their mechanical behaviour. Decreasing elastic modulus led to significantly lower migration speed of HCECs, slightly higher number of apoptotic cells as well as significantly higher number of necrotic cells. Furthermore, while no significant changes in adhesion molecules occurred, dramatic changes in cytoskeleton structure was seen on cells cultured on compliant matrices. Also, the DVC code was capable of detecting both in plane and out of plane deformations from confocal images. It was found that substrate elastic modulus can change the pattern of displacements on compliant substrate compared to stiff ones. Results of the present study suggest that the deformation pattern and magnitude does not change over the body of cells and that they are rather similar in the leading edge and trailing edge. Deformation under the nucleus was also assessed and for compliant and stiff substrates were present while no deformation was found under the cells cultured on medium stiffness substrates. It was also speculated that mechanical interaction of HCECs with their substrates can be more complicated than currently known and cells seem to be able to exert moments on their substrate as well as forces. Results presented in this thesis demonstrate that HCECs are sensitive to substrate stiffness and elastic modulus can affect their behaviour. Furthermore, considering the complexity of HCECs mechanical interaction with their substrates, it is critical to study both biology and mechanics for full comprehension of cellular interaction with the ocular environment.