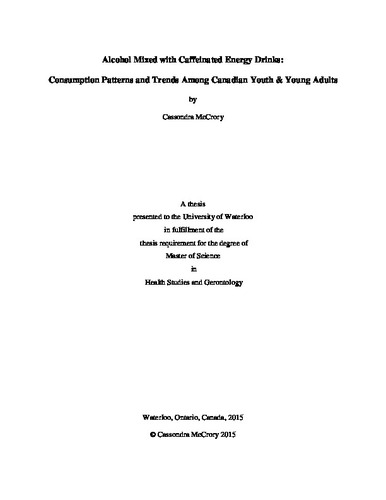 Use of caffeinated energy drinks (CEDs) and alcohol mixed with energy drinks (AmEDs) is a growing trend worldwide, and in Canada, youth and young adults are the biggest consumers. Health Canada has recently changed regulations for CEDs, mildly affecting AmEDs. There are growing concerns around AmED use, including adverse health effects, excessive caffeine and alcohol consumption, and risk behaviours. There is currently insufficient evidence around AmED use in Canada to adequately inform policy and support stricter regulations. The current study sought to examine AmED use among youth and young adults in Canada, including associations with socio-demographics and behavioural characteristics. Responses were collected from an online-survey for 1989 respondents in Canada between the ages of 12-24. AmED outcomes, including awareness, use, type of AmED, location of use, reasons for use and risk behaviour were examined with multivariate logistic regression models including covariates sex, age, ethnicity, BMI, province, sleep patterns, school grades, maternal education, spending money, sensation seeking and binge drinking. Approximately 25% of the total sample reported AmED use in their lifetimes, and 74% of users reporting use in the past 12 months. Ever having AmED was greater (at p<0.05) among older youth and young adults, those living in BC or AB, SK, MB, and who binge drink. Current AmED use was greater among non-‘Whites’, those who did not report sleep time, and who reported greater binge drinking. Binge drinking was associated with the majority of AmED outcomes examined, including ever use, current use, pre-mixed AmEDs, AmED served by a bartender, used for intoxication or energy, and AmED awareness. Consumption of AmEDs is common among youth and young adults, and strongly associated with age, binge drinking and location of residence.