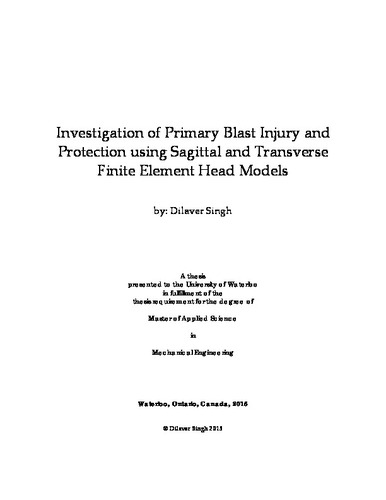 The prevalence of blast related mild traumatic brain injury (mTBI) in recent military conflicts, attributed in part to an increased exposure to improvised explosive devices (IEDs), requires further understanding to develop methods to mitigate the effects of primary blast exposure. Although general blast injury has been studied extensively since the 1950’s, many aspects of mTBI remain unclear, including specific injury mechanisms and injury criteria. The purpose of this work was to develop finite element models to investigate primary blast injury to the head in the loading regimes relevant to mTBI, to use the models to determine the response of the brain tissue, and ultimately to investigate the effectiveness of helmets on response mitigation. Since blast is inherently a wave dominated phenomena, finite element models require relatively small elements to resolve complex pressure wave transmission and reflections in order to accurately predict tissue response. Furthermore, mesh continuity between the tissue structures is necessary to ensure accurate wave transmission. The computational limitations present in analyzing a full three dimensional blast head model led to the development of sagittal and transverse planar models, which provide a fully coupled analysis with the required mesh resolution while remaining computationally feasible. The models consist of a single layer of solid hexahedral elements, and include all of the relevant tissues in the head including the skin, muscle, skull, cerebrospinal fluid, and brain. The sagittal and transverse models were validated using head kinematics against experimental data on Hybrid III head-forms exposed to free-field blast. The peak head accelerations of the models was in close agreement to the experimental data, and the HIC15 predictions were in reasonable agreement. In addition, the models were validated for intracranial pressure using experimental data from cadaveric heads exposed to shock tube loading. The intracranial pressures predicted by the sagittal and transverse models was in good agreement at the frontal, temporal, and parietal locations, and in fair agreement at the occipital location. A simplified three dimensional ellipsoid study was undertaken to verify that sagittal and transverse planar models are capable of representing a three dimensional shape. This investigation confirmed that the pressures predicted by the planar models are accurate at the frontal, temporal, and parietal locations, although underpredicted at the occipital location due to three dimensional wave superposition that becomes significant at the occipital region. The sagittal and transverse models were run at three representative blast load cases, corresponding to 5 kg of C4 at 3, 3.5, and 4 m standoff distances, and the resulting intracranial strains and pressures were investigated. The sagittal and transverse models report peak principal strains of 0.035 – 0.062 and 0.053 – 0.087 respectively. In comparison to the available threshold values of principal strain in the literature, the strains predicted by the models are generally low. While the strains reported by the models in primary blast are small, the strain rates are significantly greater (ranging from 226 – 571 s-1) than those seen in typical automotive or blunt impact scenarios. Furthermore, the models report that significant levels of intracranial pressure, on the order of several atmospheres, can be generated in the brain tissue during primary blast exposure. The peak pressures in the brain tissue for both models typically exceeded the existing injury thresholds for intracranial that are available in the literature. However, these existing criteria were generally developed for automotive crash scenarios, so may not be suitable for the short durations inherent to blast. The magnitudes of intracranial pressure increased significantly with increasing blast load severity, while changes in principal strain were relatively small, and peak strains were low in all three load cases, suggesting that pressure may be a more appropriate injury response metric for blast injury. The sagittal and transverse models were outfitted with various military helmet configurations and materials to investigate the influence of helmet visors, foam lining presence and density, and Kevlar material stiffness on the protective properties of the helmet. The peak head accelerations and intracranial pressures were compared for low and high intensity blast loads. In general, the presence of a helmet resulted in reduced peak head accelerations, and a greater reduction was reported with the addition of a half-visor and full-visor. The presence of a visor significantly reduced positive intracranial pressures in all cases, although increased the maximum negative pressures in some cases. The effects of the foam lining material was not as significant to the model response as the helmet visor configurations, but in general, a lower density foam provided better load mitigation. In cases where there was no foam lining, pressure wave reflections in the air gap between the helmet and head were found to cause greater intracranial pressures in adjacent brain tissue, although the magnitudes of these increased pressures were generally lower than the incident compressive pressures caused by the initial wave impact.