Towards Autonomous Driving at the Limit of Friction 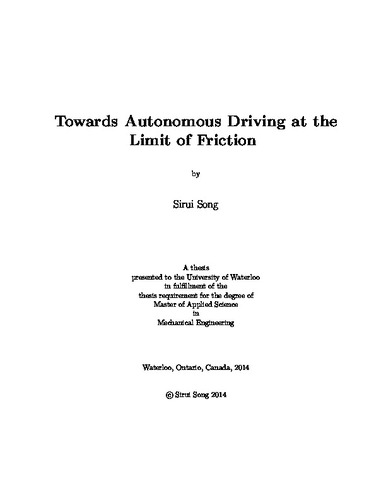 Autonomous vehicles have become a reality, many vehicles have implemented some features to allow partial or full autonomy; however, full autonomous driving near the limit of friction still presents many obstacles, especially near the limit of friction. Autonomous test vehicles are expensive to build and maintain, running the vehicles usually requires highly specialized training, and testing can be dangerous. Research has shown that small sized scaled vehicles may be used as an alternative to full size vehicle testing. The first part of this thesis presents the construction of a 1=5th scaled vehicle testbed. This testbed is inexpensive to construct, easy to maintain, and safe to test compared to full size vehicles. In the linear region, the dynamic response of the tires also closely mimics full size tires and the Dugoff tire model. The small sized testbed is therefore an ideal alternative to full size vehicles. The interaction between the road and the tires remains a challenge to estimate, but a requirement for eff ective control. Tire dynamics are highly non-linear, and are dependent on many variables. Tire slip angles are di fficult to estimate without expensive sensors set-up. Many linear and non-linear estimation methods have been developed to tackle this problem, but each having its limitations. The second part of the thesis presents a method for slip angle estimation, and proposes an observer design which integrates a linear component with the Dugoff tire model and a pneumatic trail estimator. This design is fast to operate, and does not require expensive sensors. With the addition of the pneumatic trail block, accurate slip angles can be obtained in the tires linear and saturation regions equally. Controlling near the limit of friction requires consistently accurate tire states, which is di fficult to achieve with slip angles. With the margin of error under a degrees, a slight error in slip angle estimates while operating at the limit of friction may result in loss of control. The final contribution of this thesis proposes a simpli ed feedforward lateral controller based on the concept of Centre of Percussion (COP), and a longitudinal controller that operates based on lateral acceleration. This control scheme avoids using slip angles, but still pushes the vehicle performance to the limit of friction. The architecture is validated in high fi delity simulations.