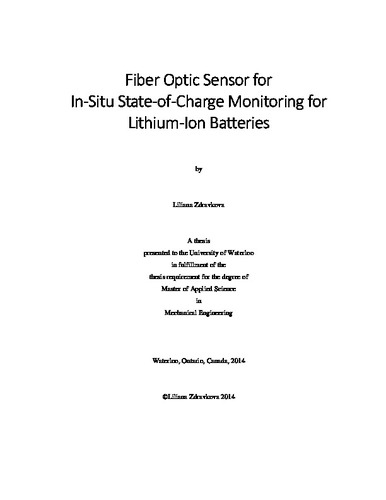 The objective of this thesis is to develop a fiber optic sensor for in-situ measurement of the optical properties of Li-ion batteries for the purpose of state-of-charge (SOC) estimation. Current methods rely on measuring the external parameters of the battery, namely voltage, current and temperature, and using various algorithms to estimate the SOC of the battery. These methods vary in accuracy and cost; generally, there is a trade-off between the two. A direct measurement of the internal state of the battery has to this point not been demonstrated as a means of SOC estimation in full cell Li-ion batteries. This could be a way to obtain more accurate estimates at a lower cost. The electrodes of Li-ion batteries have been found to exhibit changing optical characteristics at different states of charge. This is especially apparent in the graphite electrode, which visibly changes in colour. Spectroscopy studies of electrodes extracted from batteries charged to different SOC values have confirmed the visual observations and have also shown changes at non-visible wavelengths. In order to measure optical changes in a live cycling battery a sensor must be incorporated into the cell. Silica fibers lend themselves to this application as they are non-reactive to the electrolyte in the battery and they can be used to make evanescent wave sensors. The evanescent wave sensor consists of a fiber with partially removed cladding that is placed in contact with the anode such that the evanescent fields interact with the electrode. The measured signal is based on the intensity modulation of the light carried by the fiber, which allows for a low cost system to be used to detect the sensor output. A method was developed to insert the sensor in a working full cell battery prepared in a Swagelok® cell. Several tests were carried out and the sensor signal recorded as the cell was charged and discharged. The signal follows the charging and discharging of the battery consistently for both full and partial cycles and the sensor response is repeatable with different sensors and battery cells. The sensor response has three regions, with the central region, between 30-60% SOC, having very high sensitivity. The optical signal can be used to estimate the SOC with an accuracy of 14% or better. The accuracy can be greatly improved with more stable batteries and an improved signal acquisition system. The sensor response was compared to an analytical model of evanescent wave sensors. The transfer matrix method is used for the model as it provides an elegant way of modeling reflection and transmission through multi layers of optical media, such as the three layer stack formed by the core and cladding of the sensor and the battery electrode. The model may be used to relate the optical properties of the electrodes to the SOC of the battery. In summary, a fiber optic evanescent wave sensor has been developed that can be used to estimate the SOC of Li-ion batteries. The sensor is novel as it measures the internal state of the battery directly and can be used to obtain estimates in real time. A simple, low-cost system is used for acquiring the sensor signal. The sensor has high sensitivity and good accuracy in estimating the SOC.