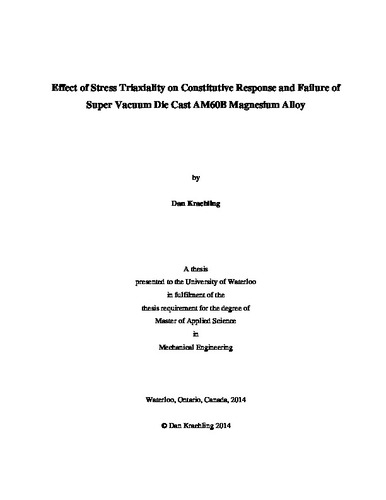 The effect of stress triaxiality on failure strain of as-cast magnesium alloy AM60B is examined. Experiments were performed on one uniaxial tension, two notched tension, and one near-biaxial hemispherical dome sample geometries to study the effect of stress triaxiality on the quasi-static constitutive and failure response of super vacuum die cast AM60B castings. Two sample material origins were used, introducing another variable; they were termed Phase I and Phase II. For all tests, local strains, failure location, and specimen elongation were tracked using two or three-dimensional digital image correlation (DIC) analysis. The uniaxial specimens were tested in two orthogonal directions to evaluate the anisotropy of the casting. The uniaxial and notched tensile specimens were tested at strain rates of 0.001 and 10 s-1 to determine the effect of strain rate on the constitutive response. Finite element models were developed to estimate effective plastic strain histories and stress state (triaxiality) as a function of notch severity. Samples of all three tensile sample geometries consistently failed beginning at the notch root as opposed to the centre. They failed after accruing on average 14-16% effective plastic strain, and they also showed a marked lack of repeatability in the failure strain distribution, with a standard deviation on average 18% of the mean failure strain of each sample geometry. The Phase II samples showed significantly lower elongations to failure, which was attributed to elevated levels of porosity and segregated porosity bands. It was found that there is some degree of transverse anisotropy present in the AM60B castings (r-values of 1.0-1.1). The AM60B castings exhibit mild positive strain rate sensitivity, evidenced by an increase in maximum stress of 4-8% with a change in strain rate from 0.001 to 10 s-1. Finally, higher stress triaxiality levels caused increases in maximum stress and decreases in elongation and local effective plastic strain at failure. This data will serve as the basis for the development of a damage-based constitutive model.