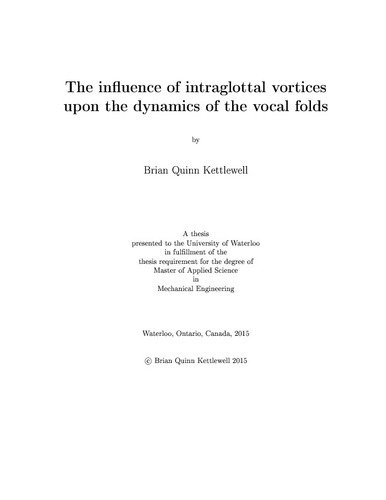 Intelligibility of speech is of critical importance in many respects. Diminished speech intelligibility causes part or all of the intended message to be lost to listeners; the outcome is frustration of speakers and listeners in the least, but impaired communication may be dangerous in some situations. Consequently, improved understanding of the factors which contribute to intelligibility of speech is of great interest in the speech community. For example, the rapid closing of the glottis in the closing phase of the phonatory cycle is generally understood to contribute favourably to the intelligibility of speech by increasing the high frequency content of the resulting speech signal. Recent experimental and numerical studies have suggested that the presence of intraglottal vortices in the closing phase of the phonatory cycle might promote rapid closing of the glottis due to the pressure gradients which arise in the presence of the vortices. To date, computational studies to assess the impact of vortex shedding within the glottis which incorporate a dynamical model of the vocal fold tissues together with a vortex advection scheme are not prevalent. In a recent computational study, an ad hoc pressure condition, of magnitude on the order of the disturbances observed in experimental work, was superimposed upon the medial vocal fold surfaces to simulate the effect of a perturbation of the pressure field. However, this approach, while it is able to quantify the effect of a perturbation of the pressure field, is not wholly satisfactory because the temporal or spatial evolution of the perturbation of the pressure field is not a consequence of a modelled physical effect or mechanism which is fundamentally related to the physics of the fluid or the fluid-structure interaction. In the present study, a two-dimensional ideal potential flow model is developed and coupled to a low-order lumped-element dynamical model of the vocal folds. Irrotational vortices are superimposed upon the glottal flow and allowed to advect through the glottis from an upstream station at a rate which ensures that they will arrive at the superior portion of the glottis in the closing phase of the phonatory cycle, when the glottis obtains its diverging configuration. This is to emulate the roll-up and shedding of intraglottal vortices occurring in the closing phase of the phonatory cycle. The vortices may be removed to compare the dynamical response of the vocal fold tissue model in the absence or presence of the intraglottal vortices. The extension of the glottal flow model to two-dimensions is important in general, not merely because it allows for the inclusion of effects which require higher spatial dimension for their description, such as advecting vortices, but the two-dimensional glottal flow model captures the salient physics of glottal flow with improved fidelity over the standard one-dimensional Bernoulli flow models which have typically been employed in studies of phonation. Additionally, the pressure field, which is unsteady in glottal flow, is determined with the unsteady Bernoulli equation; the unsteady term is found to be significant, thus, again, the model improves upon potential flow models employed to date. The surface pressure on the medial surface of the vocal folds exhibits strong deviation near the inferior and superior margins of the medial surfaces, and, because these entail longer moment arms, larger pitching moments are obtained. It is demonstrated that the mucosal wave, in the transverse motion of the vocal folds, as the cover tissues pitch about their respective nodal points, a greater amplitude of angular displacement is observed with the two-dimensional model. The resulting glottal area waveform obtains a more skewed appearance which causes it to qualitatively appear more closely akin to clinically obtained glottal waveforms despite that the simulation model is uncoupled from the acoustics of the upper vocal tract. In comparing the simulation results, the effect of the vortices is seen to be ephemeral; the vortices rapidly advect into the supraglottal space whence they impart little upstream influence. The vortex strength determines two competing effects, which entails that the vortices should have little effect upon the dynamics of the vocal folds. In particular, as the strength of the vortices increases, the magnitude of the pressure perturbation becomes more significant, however, for a given vortex spacing, the vortices will advect more rapidly into the supraglottal region thus rapidly reducing their effect; because the perturbation of the pressure field is brief, it does not impart sufficient impulse to overcome the inertia of the vocal fold tissues. Alternatively, as vortex strength decreases, the intraglottal vortices dwell in the glottal space longer, but the magnitude of the pressure perturbation is significantly diminished. Again, the modified pressure field does not impart sufficient impulse to overcome the inertia of the vocal folds, and their behaviour remains relatively unperturbed. That the glottal area waveform in its closing phase is essentially unaffected by the presence of intraglottal vortices is demonstrated within the proposed modelling framework.

Brian Quinn Kettlewell (2015). The influence of intraglottal vortices upon the dynamics of the vocal folds. UWSpace. http://hdl.handle.net/10012/9056