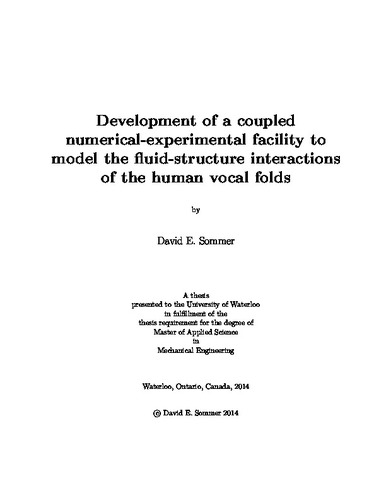 Voiced speech is a complex process that involves the exchange of energy between the air flow from the lungs and the elastic tissue of the vocal folds. Accurate modelling of the fluid-structure interactions of speech is paramount to understand the physical phenomena. These interactions have been studied with both experimental and numerical models. Numerical models of speech rely on over-simplified models to describe the airflow, while experimental investigations fail to accurately capture the energy exchange from the fluid to the tissue. To address these shortcomings, a coupled numerical-experimental facility is proposed for modelling speech, where the tissue is solved numerically and fluid pressure on the folds is measured experimentally in real-time. Fifteen times physiological scale mechanical models of the vocal folds are instrumented with pressure sensors to record the spatial pressure distribution over the surface of the model. A propylene glycol solution, with a viscosity of μ = 0.01 Pa s, is selected as the working fluid to allow for matching of the Reynolds, Euler, and Strouhal numbers. A motion system independently actuates each vocal fold model to replicate the two primary modes of physiological vocal fold motion. A real time controller reads the pressure distribution on the vocal fold model surface, scales it to physiological levels, and applies the loading to the Steinecke and Herzel two-mass numerical model of the vocal folds. The response is calculated at each time step under the current pressure loading. The resulting position and velocity outputs are scaled up to experimental size and the vocal fold models are moved accordingly. A custom constant pressure differential flow tunnel is constructed from fibreglass to provide flow through the vocal fold models. The flow of water through the empty test section of the tunnel shows the axial velocity is spatially uniform within 10% and the temporal fluctuations are 6.8% at the middle of the test section. Installing the vocal fold models, with their inherent contracting geometry, the temporal fluctuations in the flow are reduced to 2.4%. These variations are likely to be reduced when the more viscous glycol working fluid is used. The facility is tested with experiments of incrementally increasing complexity to validate its operation. A single degree of freedom step response test and wind tunnel test characterize the dynamical response to pressure changes. Modelling the response of a single vocal fold model loaded by an impinging jet validates motion system and control algorithms. Flow through the vocal fold models installed in the test section in static and driven configuration exhibit representative flow behaviour as compared to prior studies. These tests demonstrate the facility's ability to model the fluid-structure interactions of human speech with unprecedented levels of control and flexibility.

David Sommer (2015). Development of a coupled numerical-experimental facility to model the fluid-structure interactions of the human vocal folds. UWSpace. http://hdl.handle.net/10012/9039