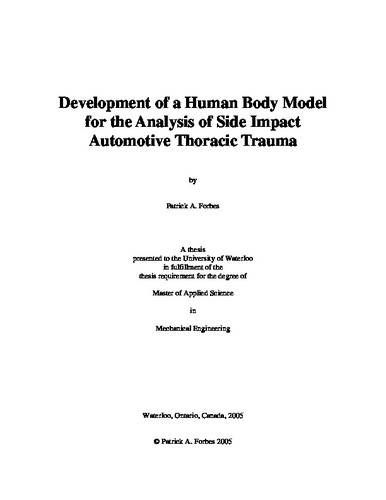 Occupant thoracic injury incurred during side impact automotive crashes constitutes a significant portion of all fatal and non-fatal automotive injuries. The limited space between the impacting vehicle and occupant can result in significant loads and corresponding injury prior to deceleration of the impacting vehicle. Within the struck vehicle, impact occurs between the occupant and various interior components. Injury is sustained to human structural components such as the thoracic cage or shoulder, and to the internal visceral components such as the heart, lungs, or aorta. Understanding the mechanism behind these injuries is an important step in improving the side impact crash safety of vehicles. This study is focused on the development of a human body numerical model for the purpose of predicting thoracic response and trauma in side impact automotive crash. <br /><br /> The human body model has been created using a previously developed thoracic numerical model, originally used for predicting thoracic trauma under simple impact conditions. The original version of the thorax model incorporated three-dimensional finite element representations of the spine, ribs, heart, lungs, major blood vessels, rib cage surface muscles and upper limbs. The present study began with improvements to the original thorax model and furthered with the development of remaining body components such that the model could be assessed in side impact conditions. <br /><br /> The improvements to the thoracic model included improved geometry and constitutive response of the surface muscles, shoulder and costal cartilage. This detailed thoracic model was complimented with a pelvis, lower limbs, an abdomen and a head to produce the full body model. These components were implemented in a simplified fashion to provide representative response without significant computational costs. The model was developed and evaluated in a stepwise fashion using experimental data from the literature including side abdominal and pelvic pendulum impact tests. <br /><br /> The accuracy of the model response was investigated using experimental testing performed on post mortem human subjects (PMHS) during side and front thoracic pendulum impacts. The model produced good agreement for the side thoracic and side shoulder pendulum impact tests and reasonable correlation during the frontal thoracic pendulum impact test. Complex loading via side sled impact tests was then investigated where the body was loaded unbelted in a NHTSA-type and WSU-type side sled test system. The thorax response was excellent when considering force, compression and injury (viscous criterion) versus time. Compression in the thorax was influenced by the arm position, which when aligned with the coronal plane produced the most aggressive form of compressive loading possible. The simplified components provided good response, falling slightly outside experimental response corridors defined as one standard deviation from the average of the experimental PMHS data. Overall, the predicted model response showed reasonable agreement with the experimental data, while at the same time highlighting areas for future developments. The results from this study suggested that the numerical finite element model developed herein could be used as a powerful tool for improving side impact automotive safety.

Patrick Forbes (2005). Development of a Human Body Model for the Analysis of Side Impact Automotive Thoracic Trauma. UWSpace. http://hdl.handle.net/10012/903