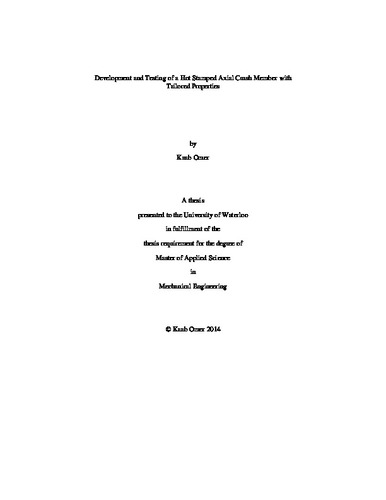 This thesis investigates the effect of tailoring the properties of a hot stamped axial crush rail consisting of a top hat cross-section on its crash response. The tailored hot stamping (THS) process is considered, in which the forming tool is partitioned into zones that are either cooled or heated. The local die temperature controls the quench rate within the part, such that the formed part will have zones of differing hardness (strength) and ductility levels. In the current work, four configurations of THS rails were formed: a non-tailored configuration using conventional room temperature tooling and three tailored configurations in which one-half of the rail was quenched while the other half was formed in tooling that was heated at different temperatures (in the range 400-700˚C). Micro-hardness measurements confirmed that THS can be used to form an axial crush member that contains tailored properties along its length. The asformed parts exhibited a Vickers hardness of ~475 HV in zones formed in cooled tooling, ~280 HV in zones formed in tooling that was heated to 400˚C and ~215 HV in zones that were formed when the die set was heated to 700˚C. The formed parts were then welded in pairs along their flanges and axially crushed under dynamic and quasi-static conditions. The non-tailored, fully hardened components did absorb the highest energy (25.8 kJ), but exhibited extensive tearing and fracture. The force-displacement and energy absorption curves from the crush experiments showed that the tailored configurations absorbed less energy (21.6-25.7 kJ), but were less susceptible to buckling and had excellent repeatability in its crash response. Tailored regions with higher temperature tooling and/or graded tooling temperature distributions exhibited the least damage and absorbed the highest energy amongst the tailored configurations. Numerical models of the THS process and subsequent crash response were developed using the Åkerström material model in LS-Dyna to model the forming and the constitutive models of Bardelcik et al. to simulate the crash behavior. The predicted micro-hardness distributions in the components with bainite or martensite as-formed phases were very accurate (usually within 10%), whereas predictions for ferrite-containing components were within 15% of the measured hardness. The crash models were able to accurately predict the energy absorption of rails that were formed in cooled and 400˚C tooling. They were less accurate for dynamic crush of rails that contained ferrite. Overall, tailoring was found to have a positive effect on the energy absorption of a hot stamped axial crush member. Future work should focus on improving the hot stamping and crash models so they can accurately account for the effect of ferrite. Furthermore, a non-axial, angled offset crush should also be performed to more thoroughly investigate the effects of tailoring.