MEMS Actuation and Self-Assembly Applied to RF and Optical Devices 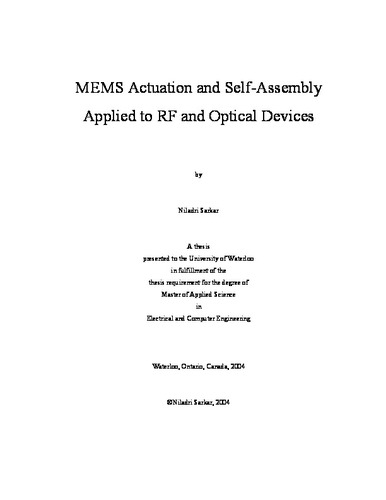 The focus of this work involves optical and RF (radio frequency) applications of novel microactuation and self-assembly techniques in MEMS (Microelectromechanical systems). The scaling of physical forces into the micro domain is favorably used to design several types of actuators that can provide large forces and large static displacements at low operation voltages. A self-assembly method based on thermally induced localized plastic deformation of microstructures has been developed to obtain truly three-dimensional structures from a planar fabrication process. RF applications include variable discrete components such as capacitors and inductors as well as tunable coupling circuits. Optical applications include scanning micromirrors with large scan angles (>90 degrees), low operation voltages (<10 Volts), and multiple degrees of freedom. One and two-dimensional periodic structures with variable periods and orientations (with respect to an incident wave) are investigated as well, and analyzed using optical phased array concepts. Throughout the research, permanent tuning via plastic deformation and power-off latching techniques are used in order to demonstrate that the optical and RF devices can exhibit zero quiescent power consumption once their geometry is set.