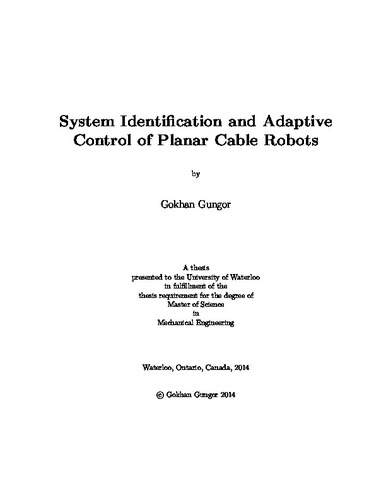 Cable-based robots generally perform better than other parallel robots with rigid links in terms of wider workspace and higher acceleration of end-effector because of light weight of robot links. Cable robots allow easy installation for outside applications at the expense of the requirement of a precise assembly of its components at the cable anchor points. In this study, system identification and adaptive control of cable planar robots are considered. Firstly, a parametric model is developed for estimation of position errors of anchor points for fully-constrained and redundant planar cable robots. A novel method based on inclusion of virtual cables facilitates the linear separation of the uncertain parameters from the input-output signals for redundant planar robots. A least-squares and gradient based parameter estimation algorithm provide the estimates of the system parameters. Further, this work deals with the design and comparison of three adaptive position control schemes combined with a classical PID controller for fully constrained and redundant planar robots. Then, three Lyapunov based adaptive controllers based on the (i) sliding mode, (ii) PD and (iii) backstepping schemes are designed to compensate for the matrix uncertainties appear in the system dynamics resulting from errors in the anchor point locations. Next, the adaptive controllers are evaluated and compared with a classical PID controller through simulations for a desired 2D singularity-free pose of the mobile platform. Supremacy of the PD control scheme over the aforementioned control schemes is observed through simulations. The least-squares algorithm is compared with the gradient-based method in terms of the speed of convergence of the estimated parameters as well. Finally, we establish linear parametric forms for common friction models, recursive least-squares on-line friction estimator is presented and adaptive friction compensation scheme is designed. The efficiency of this design is discussed via simulation results.