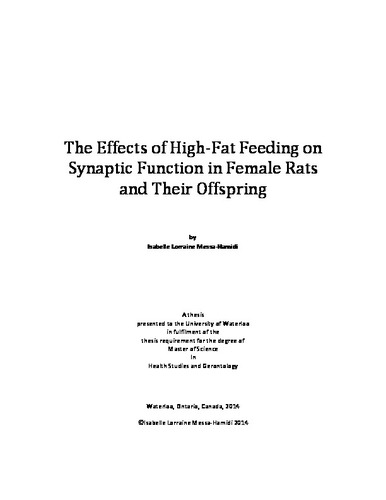 The prevalence of obesity has been increasing across the globe at an unprecedented rate, and obesity is associated with a number of diseases, including diabetes, hypertension, and certain types of cancer. In recent years, increasing evidence has shown that obesity can also cause cognitive impairment, and research is increasingly aimed at elucidating both the nature of, and the mechanisms behind, these impairments in the brain. Because the hippocampus has been shown to be particularly vulnerable to these effects, both of the studies presented in this thesis aimed to investigate the effects of high-fat diet-induced obesity on hippocampal synaptic plasticity. In study 1, female rats were placed on either a high-fat diet (HFD; 45% saturated fat) or a control diet (CD; 10% fat) for 16 weeks, after which a subset of females were sacrificed, with the remainder being bred to investigate the transgenerational effects of HFD exposure. Body weights, food weights, and oral glucose tolerance were measured throughout the feeding period. All offspring were weaned onto a CD, and were sacrificed at PND 56. In both the maternal and offspring generations, various organ weights were collected at sacrifice, and long-term potentiation (LTP) was measured in the CA1 dendritic field of acutely prepared hippocampal slices. Results showed impaired blood glucose tolerance as early as one month on the HFD in the maternal generation, as well as significantly heavier retroperitoneal fat pads, with no differences in body weight. LTP was also significantly impaired in HFD animals in the maternal generation. HFD offspring were trending towards increased body weight, with no differences in retroperitoneal fat pad weight or oral glucose tolerance. There were also no diet-induced differences in LTP in the offspring. Study 2 had a similar design, although the animals began feeding in adolescence (PND 28), as opposed to young adulthood (PND 56, as in study 1), to investigate the effects of critical periods of exposure. The feeding period was also shortened to 10 weeks, and the CD was changed so as to eliminate its refined sugar content. Finally, because of the longitudinal nature of the transgenerational portion of study 2, the timing was such that only data from the maternal generation is presented here. In study 2, the HFD group was significantly heavier after only one week on the diet, and had increased adiposity at sacrifice. Differences in oral glucose tolerance, however, were not apparent until after 2 months on the diet, and there were no diet-induced differences in LTP. This lack of significant electrophysiological findings is consistent with the lack of differences seen by another student in the Morris Water Maze, and suggests that the shortened feeding period in study 2 may not have allowed sufficient time for the HFD to impair synaptic function.

Isabelle Lorraine Messa-Hamidi (2014). The Effects of High-Fat Feeding on Synaptic Function in Female Rats and Their Offspring. UWSpace. http://hdl.handle.net/10012/8941