Politics, Principles and Pluralism: On why liberalism must be inconsistent if correct 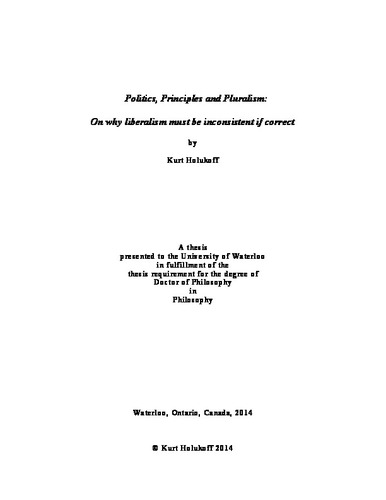 In this dissertation, the author argues that constructivist foundations of political liberalism require a rarely recognized sort of pluralism—not only the familiar pluralism between ideas about how we ought to live that are the stock in trade of standard accounts of liberalism, but a pluralism about political foundations as well. The author argues that making sense of this requires revision to the way we sometimes understand key concepts (such as obligation), and develops an inconsistency-tolerant, pluralism friendly deontic logic for this purpose. A pluralist friendly obligation is argued to be one that represents moral and political principles in contrastive terms (analogous to contrastive explanation from Bas Van Fraassen), in virtue of the need to order acting upon prescriptions. The author develops a class of mathematical objects choices to model answers to why we should choose one policy over alternatives. Constructivist foundations also turn out to be prima facie pluralist foundations, in virtue of the nature of the norms guiding abstraction. This leads to a proof that, in a weakest base logic, legitimate moral or political codes in a pluralist context must reference each other. Upon explicating the distinction between perspectives that could consider unrealizable plans and perspectives that are themselves unrealizable, the author proves that in our world liberalism is itself an unrealizable plan. These results clearly illuminate what is at stake when justifying foundations for a liberal state.

Kurt Holukoff (2014). Politics, Principles and Pluralism: On why liberalism must be inconsistent if correct. UWSpace. http://hdl.handle.net/10012/8919