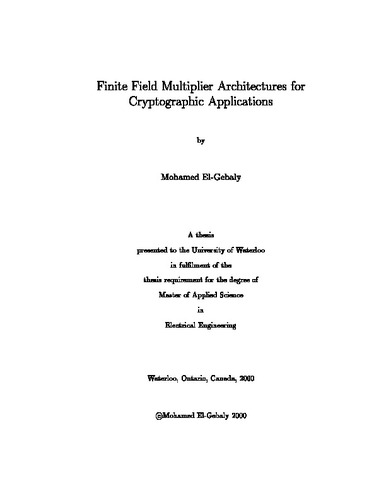 Security issues have started to play an important role in the wireless communication and computer networks due to the migration of commerce practices to the electronic medium. The deployment of security procedures requires the implementation of cryptographic algorithms. Performance has always been one of the most critical issues of a cryptographic function, which determines its effectiveness. Among those cryptographic algorithms are the elliptic curve cryptosystems which use the arithmetic of finite fields. Furthermore, fields of characteristic two are preferred since they provide carry-free arithmetic and at the same time a simple way to represent field elements on current processor architectures. Multiplication is a very crucial operation in finite field computations. In this contribution, we compare most of the multiplier architectures found in the literature to clarify the issue of choosing a suitable architecture for a specific application. The importance of the measuring the energy consumption in addition to the conventional measures for energy-critical applications is also emphasized. A new parallel-in serial-out multiplier based on all-one polynomials (AOP) using the shifted polynomial basis of representation is presented. The proposed multiplier is area efficient for hardware realization. Low hardware complexity is advantageous for implementation in constrained environments such as smart cards. Architecture of an elliptic curve coprocessor has been developed using the proposed multiplier. The instruction set architecture has been also designed. The coprocessor has been simulated using VHDL to very the functionality. The coprocessor is capable of performing the scalar multiplication operation over elliptic curves. Point doubling and addition procedures are hardwired inside the coprocessor to allow for faster operation.