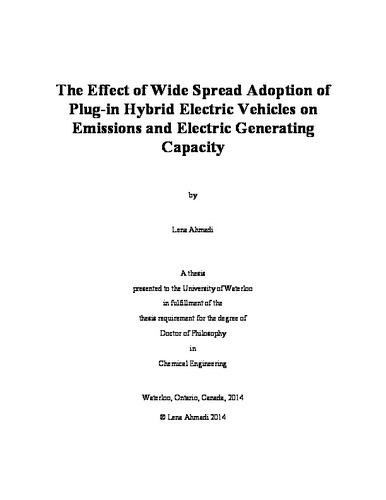 Effects of the wide spread adoption of PHEVs on Ontario electric generating capacity from the year 2014 to 2030 is studied. Long-term forecasting models of load demands and the number of light-duty vehicles sold are developed by employing linear and non-linear regression techniques. Number of PHEVs is forecasted through consideration of three scenarios of penetration levels, such as mild, normal and aggressive ones. Four different scenarios of the charging pattern are also developed since not all people charge their PHEVs during the off-peak period. Extra required load demand for PHEVs charging purposes is calculated. The demands for the worst case, assumed highest transition of PHEVs penetration with the peak period charging pattern, is compared with generator availability at peak in Ontario. Results present that at the end of 2030 in which the total number of PHEVs is 890,362 vehicles, supply is less than the peak load demand. The additional electricity demand on the Ontario electricity grid from charging PHEVs is incorporated for electricity production planning purposes. Moreover, the impact of the socio-economic factors is analyzed. A penetration function is developed which consists of two parts, diffusion rate and the other representing the socio-economic factors. Three general scenarios are considered when deploying the penetration function. Each scenario presents the weight assigned to the diffusion rate and the socio-economic factors. Next, Aggressive, Average and Mild vehicles all-in costs, are studied the adoption rates for males and females separately. Overall, it is indicated that the EVs, HEVs and PHEVs adoptions will increase substantially in the future, comprising a fraction of approximately 30%-38% (depending on the considered scenario) of the total conventional vehicles sold by 2050. Furthermore, Zonal analysis is also accomplished. This study shows that with the increasing adoption of EVs and PHEVs, emissions decrease significantly through 2014 – 2050, specifically in three zones which are The Metropolitan Area of Toronto, Ottawa Ontario, and The Metropolitan Area of Hamilton. This is presented by assuming three different scenarios. The number of related EVs and PHEVs through each scenario is forecasted. To show the quantity of emissions produced in the zones considering the scenarios, initially the emissions factor for Greenhouse Gases (GHG) and Major Non-GHG pollutants are found. The results confirm that the total emissions per season will drop by roughly 40% to 50% of the quantity they would emit when no EVs or PHEVs are penetrated. Finally, the Ontario energy planning is optimized to minimize the value of the cost of the electricity over sixteen years (2014-2030). The mathematical objective function consists of the fuel costs, fixed and variable operating and maintenance costs, the capital costs for a new power plant, and the retrofit costs of existing power plants (associated with fuel switching from coal to natural gas for coal-fired stations). The mathematical model of objective function and related constraints are applied in the GAMS software. Because of having mixed integer model, the programming code set to be solved through CPLEX solver. Five different case studies are performed with different penetration rate, type of new power plants, and CO2 emission constraints. Among all the case studies, the one requiring the most new capacity, (~8,748 MW), is Case D, assuming the base case with 6% reduction in CO2 in year 2018 and high PHEV penetration. The next highest one is Case B, assume the base case, doubled NG prices, medium PHEV and no CO2 emissions reduction target with an increase of 34.78% in the total installed capacity in 2030. Furthermore, optimization results indicate that by not utilizing coal power stations the CO2 emissions are the lowest; ~500 tonnes compared to ~900 tonnes when coal is permitted. To conclude, if the most likely scenario is followed (a) the Province cannot meet the expected demand and will need to build significant new capacity and (b) the Province will see significant reductions in CO2 emissions.