Reducing the Emergence of the Gaps: Computation for Weak Emergence 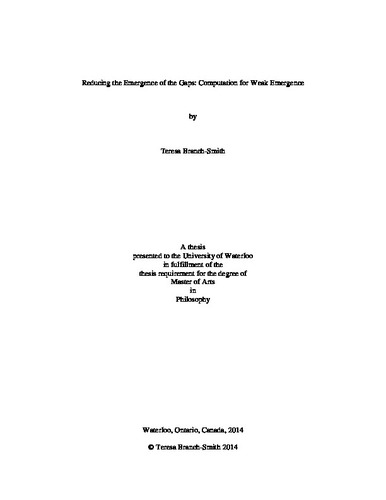 This thesis contributes to the growing literature surrounding the importance of weak emergence by showing it can account for more phenomena than originally conceived via the use of computational reduction. Weak emergence refers to unpredictable higher-level phenomena that are reducible to lower-level phenomena. The ability of weak emergence to reduce higher-level phenomena to their lower-level constituents is useful for establishing a mechanistic explanation of emergent features. The tension between holistic higher-level phenomena and lower-level parts is a classic argument in philosophy and investigating emergent phenomena is one means of furthering the discussion. In particular I will look at theories of emergence and computational analysis related to systems biology. Systems biology uses modern computational analysis to model naturally occurring interactions of higher-level elements and, in combination with synthetic biology, can trace complex macro-level interactions back to micro-level occurrences without explanatory loss. What makes this interesting is that systems biology is able to explain and reduce phenomena that were once considered strongly emergent, therefore shrinking the number of phenomena we consider strongly emergent. Furthermore, systems biology offers a compelling milieu for philosophers to contribute to scientific discourse and vice versa. Hence, it is a worthwhile endeavor for philosophers to test their theories of emergence against actual practice as a way to inform their concepts. I will use examples traditionally considered strongly emergent (in proteomics) to show that these cases can in fact be reduced and categorized as weakly emergent because they are unpredictable but not irreducible. The reclassification of these phenomena challenges strong emergence, and reveals it to be an ‘Emergence of the Gaps’ whereby the number of phenomena strong emergence can describe decreases in an inversely proportional relationship to increased computational capacity.