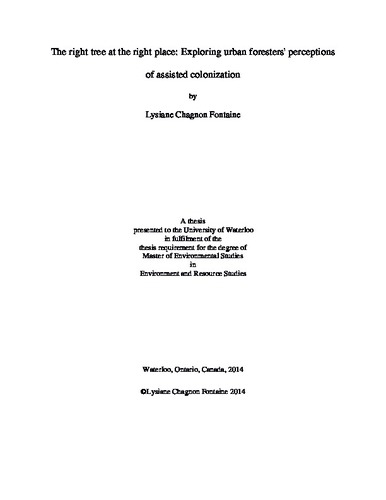 Urban forests feature harsh growing conditions for trees. Urban trees are surrounded by heavy anthropogenic disturbances, they often have low genetic diversity, and it is difficult for managers to maintain them because of the fragmented ownership within cities. Climate change is now expected to worsen current ecological stressors. Extreme weather events, as well as pest and disease outbreaks, will likely become more frequent, and as the climate becomes warmer, populations and species will see their habitat shift to the north. Trees are long-lived species, and their ability to adapt or migrate can be challenged by rapid climate change. To sustain ecosystem services and forest biodiversity, and to rescue vulnerable species, urban foresters might resort to assisted colonization. With this strategy, species or populations are moved northward so they can establish in their new suitable climate. Assisted colonization is controversial because it entails many ecological risks and uncertainties, and appears to go against traditional conservation values of nature restoration and preservation. This thesis seeks to address a gap in our understanding of the perspectives and attitudes of urban foresters towards assisted colonization and related climate change adaptation strategies. I conducted semi-structured, open-ended interviews with 18 urban foresters from various forestry-related organizations in southern Ontario. I used a grounded approach for coding, letting the data guide the themes and codes rather than using predetermined ones. After going through my data a few times and developing codes, I then let concepts from the literature guide my coding to further refine the codes. I found that while urban foresters are generally open to constrained use of assisted colonization, it is not officially part of their ongoing management strategies. Respondents believe there need to be tree species trials and experiments, as well as comprehensive inventories and monitoring of the urban forest, but few were engaged in such programs. The findings show that ongoing efforts of such programs are small-scale and scattered across municipalities and organizations. I also found that respondents were planting southern tree species at the northern edge of their range, unknowingly implementing assisted population expansion, a variant of assisted colonization. For plantings in naturalized areas, respondents still strongly prioritize native species in their selection. In the short term, this suggests that assisted colonization is more likely to be used as a means to provide ecosystem services when native species fail to fulfill this role. Going forward with assisted migration will require increased community involvement and partnerships, and the fragmented ownership that characterizes urban forests might complicate assisted colonization initiatives. To overcome the prevailing uncertainties that act as an impediment to the implementation of assisted colonization, higher levels of governance will have to provide leadership and guidance. Institutional structures that facilitate collaboration and knowledge sharing will also be essential to promote communication and to allow the exchange of information about both existing trials and experiments and new ones.