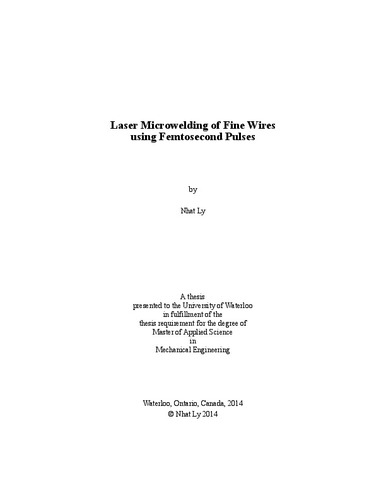 An alternative wire joining method is explored that utilizes femtosecond laser pulses directed towards the contact point of two pieces of 25-μm diameter Au bonding wires typically used in microelectronics wire bonding. The two pieces are in the form of wire loops bonded onto four terminals in a crossing pattern. In-situ four-wire measurement is used to measure the contact resistance at the contact point of the crossed-wires before and after femtosecond laser irradiation. A greater decrease in contact resistance correlates to a stronger joint between the crossed-wires. Broad beam laser irradiation was initially investigated to understand the effect femtosecond laser pulses had on Au microwires. Focus beam laser irradiation was utilized later to construct a parameter space. Laser parameters of pulse energy and pulse number were varied between 20 to 40 μJ and 10 to 100 pulses respectively to develop an initial process window. With a repetition rate of 1 kHz, the corresponding average power that the crossed-wires received was between 20 to 40 mW. Over 90 % of all crossed-wires samples showed drops in contact resistance ranging from 39.8 % to 83.3 %, indicating that microwelding of fine Au wire is possible with femtosecond laser pulses. Joining mechanisms are proposed for broad beam and focus beam irradiation. SEM imaging of the weld morphologies for focus beam irradiation revealed two distinct structures on the crossed-wires: a lip structure with veins resultant from molten material splash and a fringe structure resultant of an interference pattern. Cross-section analysis reveal two different modes of joining under focus beam irradiation depending on whether the laser pulses are precisely directly between the crossed-wires. A case study was done to investigate how the firing rate of the laser affects the crossed-wire joints. Focus beam laser irradiation using lower pulse numbers in high repetition showed a larger contact resistance drop than using higher pulse numbers in low repetition. The joint breaking strength of the laser welds on the crossed-wires is too low to be measured. Conclusions are drawn based on the experimental data and future work is discussed.