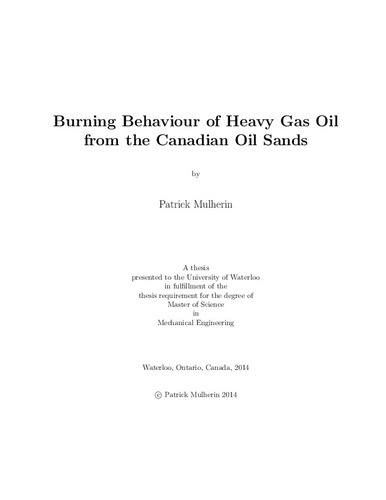 This work presents the first systematic investigation and characterisation of the burning behaviour of untreated heavy gas oil from the Canadian oil sands, an intermediate product in the upgrading process of forming synthetic crude oil from bitumen. As this oil is an intermediate product and has little commercial value, there has been little characterisation of the burning behaviour or propensity for boilover of the fuel. The objective of this study was to investigate the global burning behaviour of untreated heavy gas oil in the effort to document key fire parameters and unique burning characteristics of the fuel, and compare with those presented in literature. This experimental series consisted of measurements of the heat release rate, rate of fuel consumption, and flame spread rate, as well as observations of overall pool fire behaviour, using heavy gas oil as well as kerosene as a reference. Further experiments investigated the effects of water suppression spray on the pool fire behaviour, and the propensity for boilover during small-scale fires. It was found that the fire properties of heavy gas oil were consistent with those of other heavy oils, most notably those of heavy fuel oil. The burning behaviour of the heavy gas oil was well represented by the traditional correlations for fire behaviour of heavy hydrocarbon fuels. Some of the measured properties for the heavy gas oil included an infinite diameter fuel regression rate of 3.0 mm/min, heat of combustion of 43.5 MJ/kg, and flame spread rate of 0.8 cm/s. Temperatures measured through the depth of the fuel layer indicated that a hot-zone did not form, and the observation was confirmed based on mass burning rates and fuel boiling temperatures that did not vary over the burning duration. At low initial fuel temperatures, the burning of the heavy gas oil was intensified by water emulsified within the oil, which led to an increase in each of the measured fire characteristics, especially that of flame spread rate. In this case, small volumes of flaming oil were projected out of the test pans, as well as into the flame column. Furthermore, the heavy gas oil was found to ‘weather’ over time, resulting in an oil with higher density and lower volatility, which caused each of the measured fire properties to decrease during the six month weathering period considered here. The heavy gas oil in the present experiments was found to have a significant propensity to mix with steam, forming a froth-like substance that expanded in volume across the surface of the fuel. This phenomenon was observed when suppression water was sprayed on the heated fuel surface, as well as in fires established over deep pools of fuel with a water sublayer. The expansion of the froth resulted in overflow of burning fuel from the experimental test pans, and thus caused fire spread beyond the pan walls. Finally, thin layer boilover was observed in heavy gas oil pool fires with a water sublayer, leading to both an increase in fire intensity and fire spread beyond the test pans.