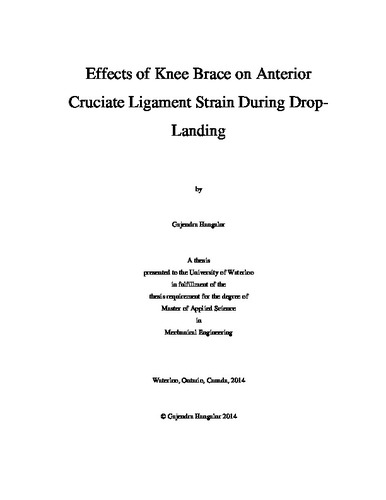 Knee is one of the most commonly injured joint in the human body and majority of the injuries are associated with ligaments which have detrimental effects on joint’s stability and function. Bracing has often been used as a prominent measure to restrain an unstable joint and for individuals with anterior cruciate ligament (ACL) injury as a post-operative treatment measure. However, it is not known if the brace would protect the ACL of an uninjured person during dynamic activities by reducing the strain in the ACL. Primary objective of this research study was to investigate the effects of knee brace on ACL during dynamic activities. Hence a combined in-vivo/ in-vitro methodology was used to assess the influence of “CTi-Custom” knee brace on ACL strain during drop-landing activity. Motion capture was performed on the drop-landing activity of a high-risk subject with and without knee brace worn. These in-vivo kinetic and kinematic parameters were subsequently input into a biomechanical model to calculate muscle forces that span the knee joint. A hybrid surrogate knee model was prepared using cast foam shell that was wrapped around a cadaver knee specimen to form an artificial interface for mounting a custom fit knee brace during in-vitro simulation. A strain gauge was instrumented on ACL of hybrid surrogate cadaver specimen and mounted on a dynamic knee simulator, where kinematics and muscle forces were applied replicating braced and unbraced drop-landing conditions. This simulation was performed with and without the brace mounted on the cadaver knee specimen and the ACL strain was measured. Observing biomechanical model outputs it was evident that muscle forces for braced and unbraced conditions were different and the knee brace appeared to reduce the ACL antagonist muscle forces thereby dissipating energy, consequently reducing the peak GRF and the internal joint forces. The peak strain in the ACL was radically different for braced (8% strain) and unbraced (18% strain) conditions. However, when unbraced kinetics/kinematics was simulated with brace mounted on the cadaver knee, the ACL strain was not different from the unbraced condition. This enabled us to conclude that the custom fit knee braces reduce the strain in the ACL of high-risk subjects thus preventing them from potential ACL injury. However, any decrease in the ACL strain observed while wearing the brace was due to the brace altering the muscle firing pattern rather than due to the mechanical restraint offered by the brace. This reinforces previous research findings that brace affects proprioceptive feedback and alters the muscle firing pattern.