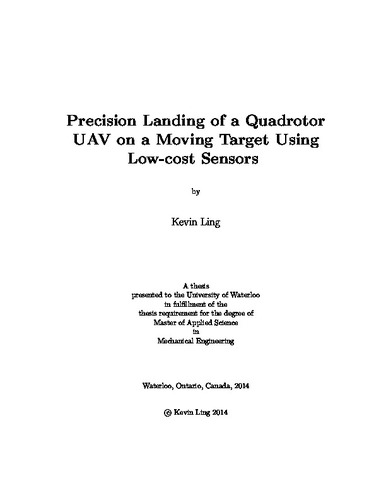 With the use of unmanned aerial vehicles (UAVs) becoming more widespread, a need for precise autonomous landings has arisen. In the maritime setting, precise autonomous landings will help to provide a safe way to recover UAVs deployed from a ship. On land, numerous applications have been proposed for UAV and unmanned ground vehicle (UGV) teams where autonomous docking is required so that the UGVs can either recover or service a UAV in the ﬁeld. Current state of the art approaches to solving the problem rely on expensive inertial measurement sensors and RTK or diﬀerential GPS systems. However, such a solution is not practical for many UAV systems. A framework to perform precision landings on a moving target using low-cost sensors is proposed in this thesis. Vision from a downward facing camera is used to track a target on the landing platform and generate high quality relative pose estimates. The landing procedure consists of three stages. First, a rendezvous stage commands the quadrotor on a path to intercept the target. A target acquisition stage then ensures that the quadrotor is tracking the landing target. Finally, visual measurements of the relative pose to the landing target are used in the target tracking stage where control and estimation are performed in a body-planar frame, without the use of GPS or magnetometer measurements. A comprehensive overview of the control and estimation required to realize the three stage landing approach is presented. Critical parts of the landing framework were implemented on an AscTec Pelican testbed. The AprilTag visual ﬁducial system is chosen for use as the landing target. Implementation details to improve the AprilTag detection pipeline are presented. Simulated and experimen- tal results validate key portions of the landing framework. The novel relative estimation scheme is evaluated in an indoor positioning system. Tracking and landing on a moving target is demonstrated in an indoor environment. Outdoor tests also validate the target tracking performance in the presence of wind.