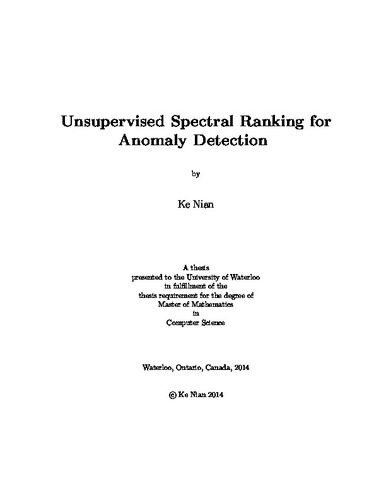 Anomaly detection is the problem of finding deviations from expected normal patterns. A wide variety of applications, such as fraud detection for credit cards and insurance, medical image monitoring, network intrusion detection, and military surveillance, can be viewed as anomaly detection. For anomaly detection, obtaining accurate labels, especially labels for anomalous cases, is costly and time consuming, if not practically infeasible. This makes supervised anomaly detection less desirable in the domain of anomaly detection. In this thesis, we propose a novel unsupervised spectral ranking method for anomaly detection (SRA). Based on the 1st non-principal eigenvectors from Laplacian matrices, the proposed SRA can generate anomaly ranking either with respect to a single majority class or with respect to multiple majority classes. The ranking type is based on whether the percentage of the smaller class instances (positive or negative) is larger than the expected upper bound of the anomaly ratio. We justify the proposed spectral ranking by establishing a connection between the unsupervised support vector machine optimization and the spectral Laplacian optimization problem. Using both synthetic and real data sets, we show that our proposed SRA is a meaningful and effective alternative to the state-of-art unsupervised anomaly ranking methods. In addition, we show that, in certain scenarios, unsupervised SRA method surpasses the state-of-art unsupervised anomaly ranking methods in terms of performance and robustness of parameter tuning. Finally, we demonstrate that choosing appropriate similarity measures remains crucial in applying our proposed SRA algorithm.