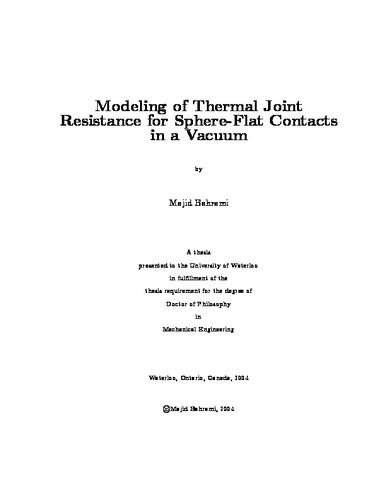 As a result of manufacturing processes, real surfaces have roughness and surface curvature. The real contact occurs only over microscopic contacts, which are typically only a few percent of the apparent contact area. Because of the surface curvature of contacting bodies, the macrocontact area is formed, the area where microcontacts are distributed randomly. The heat flow must pass through the macrocontact and then microcontacts to transfer from one body to another. This phenomenon leads to a relatively high temperature drop across the interface. Thermal contact resistance (TCR) is a complex interdisciplinary problem, which includes geometrical, mechanical, and thermal analyses. Each part includes a micro and a macro scale sub-problem. Analytical, experimental, and numerical models have been developed to predict TCR since the 1930's. Through comparison with more than 400 experimental data points, it is shown that the existing models are applicable only to the limiting cases and none of them covers the general non-conforming rough contact. The objective of this study is to develop a compact analytical model for predicting TCR for the entire range of non-conforming contacts, i. e. , from conforming rough to smooth sphere-flat in a vacuum. The contact mechanics of the joint must be known prior to solving the thermal problem. A new mechanical model is developed for spherical rough contacts. The deformation modes of the surface asperities and the bulk material of contacting bodies are assumed to be plastic and elastic, respectively. A closed set of governing relationships is derived. An algorithm and a computer code are developed to solve the relationships numerically. Applying Buckingham Pi theorem, the independent non-dimensional parameters that describe the contact problem are specified. A general pressure distribution is proposed that covers the entire spherical rough contacts, including the Hertzian smooth contact. Simple correlations are proposed for the general pressure distribution and the radius of the macrocontact area, as functions of the non-dimensional parameters. These correlations are compared with experimental data collected by others and good agreement is observed. Also a criterion is proposed to identify the flat surface, where the influence of surface curvature on the contact pressure is negligible. Thermal contact resistance is considered as the superposition of macro and micro thermal components. The flux tube geometry is chosen as the basic element in the thermal analysis of microcontacts. Simple expressions for determining TCR of non-conforming rough joints are derived which cover the entire range of TCR by using the general pressure distribution and the flux tube solution. A complete parametric study is performed; it is seen that there is a value of surface roughness that minimizes TCR. The thermal model is verified with more than 600 data points, collected by many researchers during the last 40 years, and good agreement is observed. A new approach is taken to study the thermal joint resistance. A novel model is developed for predicting the TCR of conforming rough contacts employing scale analysis methods. It is shown that the microcontacts can be modeled as heat sources on a half-space for engineering applications. The scale analysis model is extended to predict TCR over the entire range of non-conforming rough contacts by using the general pressure distribution developed in the mechanical model. It is shown that the surface curvature and contact pressure distribution have no effect on the effective micro thermal resistance. A new non-dimensional parameter is introduced as a criterion to identify the three regions of TCR, i. e. , the conforming rough, the smooth spherical, and the transition regions. An experimental program is designed and data points are collected for spherical rough contacts in a vacuum. The radius of curvature of the tested specimens are relatively large (in the order of m) and can not be seen by the naked eye. However, even at relatively large applied loads the measured joint resistance (the macro thermal component) is still large which shows the importance of surface out-of-flatness/curvature. Collected data are compared with the scale analysis model and excellent agreement is observed. The maximum relative difference between the model and the collected data is 6. 8 percent and the relative RMS difference is approximately 4 percent. Additionally, the proposed scale analysis model is compared/verified with more than 880 TCR data points collected by many researchers. These data cover a wide range of materials, surface characteristics, thermal and mechanical properties, mean joint temperature, directional heat transfer effect, and contact between dissimilar metals. The RMS difference between the model and all data is less than 13. 8 percent.