Where Have You Been, What Did You See, and How Did You Get Here: Effects of Prior Trial History in the Context of Exogenous and Endogenous Spatial Cuing 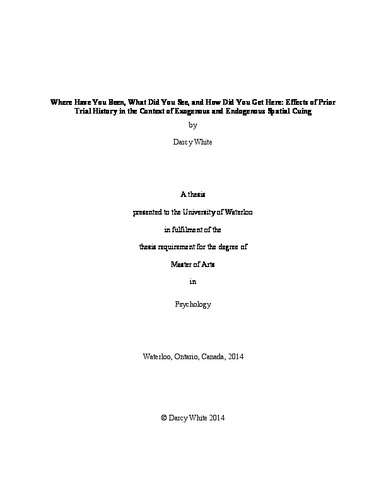 Three spatial cuing experiments assessed whether the nature of the prior trial affects performance in a two choice target identification task. In Experiment 1 current trial RT was strongly affected by whether prior trial cue validity, prior trial target identity, and prior trial target location were the same as on the current trial when an exogenous spatial cue was 50% valid. Experiment 2 demonstrates that, with an endogenous cue, current trial RT was also affected by whether target identity or target location changed from the prior trial. Finally, in Experiment 3 when the cue was exogenous and cue validity was 75%, current trial RT was only affected by the target’s identity on the prior trial. It is concluded that (a) the effects of prior trial history reflect yet another context in which the effects of exogenous and endogenous spatial cuing differ, and (b) the difference in RT to a target preceded by a valid or invalid cue does not reflect a pure measure of spatial attention. Instead, participants appear to weigh information from all dimensions on the previous trial when identifying the target on the current trial. An analysis of the RT distributions yielded significant differences with respect to where in the distribution each factor affected performance. Overall, these data demonstrate that both prior trial effects and analyses of RT distributions of such effects are a rich source of systematic variance that merits further investigation and theoretical consideration.

Darcy White (2014). Where Have You Been, What Did You See, and How Did You Get Here: Effects of Prior Trial History in the Context of Exogenous and Endogenous Spatial Cuing. UWSpace. http://hdl.handle.net/10012/8744