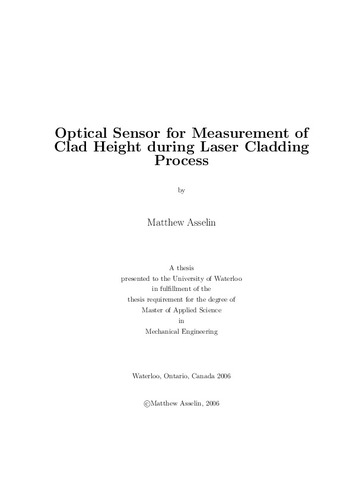 The process of laser cladding consists of depositing successive layers of molten metallic powder to create a near-net shape. A high-power laser is used to melt incoming metallic powder, which forms a melt pool on the surface. As the latter moves beneath the laser, this newly created melt pool solidifies. By properly controlling the trajectory of deposition tracks, one can create a diverse range of shapes with varying complexities. However, the process is very sensitive to parameters, requiring constant attention from technicians. This lends itself perfectly to the addition of automatic controllers whereby supervision is minimal. <br /><br /> In this thesis, an optical sensor is developed to monitor the process zone. The sensor will output a measurement of the height of solidified clad, which in turn can be used by a controller to adjust this geometrical feature. The thesis is divided into three main parts, each contributing to the final algorithm. <br /><br /> First, in Chapter 3 an analysis is performed on the light irradiating from the interaction zone (or melt pool). It is stated that the dominating source of light is governed by blackbody radiation from this molten metal. This is confirmed by analyzing a series of images captured through a digital camera, where various narrow bandpass filters were utilized to selectively view a portion of the CCD-sensor's spectrum. This investigation also leads to the selection of bandpass filter such that a stable, relatively intense melt pool is captured through the digital camera's CCD-sensor. <br /><br /> Second, in Chapter 4 the captured images are taken through a pair of image processing techniques, outputting a series of coordinates representating the melt pool's boundary. The image is first analyzed to calculate an optimal threshold level based on the minimization of fuzzy entropy. With this threshold selected, the grayscale image is converted into black-and-white, where the white pixels represent the melt pool. After this step, the melt pool's boundary is extracted through an 8-connectivity border tracing algorithm. This technique outputs a series of coordinates (in pixels) as though one were traveling along the melt pool in a clockwise rotation. <br /><br /> Last, Chapter 5 analyzes these pixel coordinates to extract the melt pool's height. The coordinates are first transformed into real-world coordinates, by use of a perspective transformation. This transformation essentially yields the melt pool's shadow, as created by a light-source coincident with the camera. As a result, the melt pool's height is estimated based upon a right-angle triangle, where the camera's angle is known, and the projected coordinates represent the shadow length (triangle's base). <br /><br /> The result of applying this series of steps to the estimation of clad heights is found at the end of Chapter 5. Results varied dramatically, from 4% error to 393%. Although the errors are large at times, they are mainly caused by a bias in the estimate. That is, the dynamics of the true clad formation are very well predicted by the algorithm, however, shifting by a certain amount. This amount varies both with substrate velocity, and the clad's direction of travel, relative to the camera. A partial explanation is given such that the clad's height is offset from the laser center-point, which is a function of both these parameters. However, the specific relationship requires further experimentation.