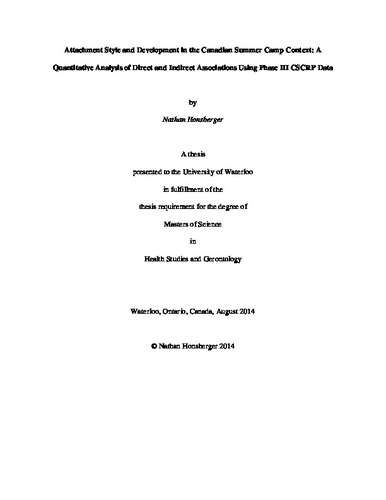 Psychosocial development is an ongoing processes beginning from birth. Attachment theory, as outlined by John Bowlby, takes a working model of self and others approach to explaining the associated psychosocial developmental phenomena (1969). The summer camp experience is a unique social setting where a child is separated from their primary attachment figure for a prolonged period of time and peers can play a larger supportive role. Applying attachment theory to the summer camp experience can help develop an understanding of the developmental processes within the summer camp experience as well as inform summer camp programming and protocol considerations aimed to support all campers. Using data from Phase III of the Canadian Summer Camp Research Project, the direct and indirect associations of attachment style with outcomes of independence, self-confidence, and emotional well-being were assessed using Pearson correlation, multiple linear regression modelling, bootstrapping based mediation analysis, and bootstrapping based interaction modelling. Although negative correlations between attachment constructs and developmental outcomes were identified, a significant direct effect for avoidance but not anxiety was found during regression modelling. Bootstrapping analysis further revealed that social connections at camp and exploration combined were a significant mediator of the relationships between avoidance and the development of independence, self-confidence, and emotional well-being. Additionally, social connections only mediated self-confidence, exploration only mediated independence, and both exploration only and social connections at camp independently moderated development of emotional well-being. A significant interaction term was also found for anxiety and avoidance combined. The interaction indicates that those who are highly avoidant and highly anxious tend to have the lowest levels of developmental outcomes. The findings provide valuable insights regarding the role of attachment history and elements of the camp experience as a mechanistic explanation for individual differences in developmental outcomes of the summer camp experience. However, further research should aim to determine the role of anxiety in low-income populations to better understand implications of expanding the reach of summer camp programs and how to foster development within a broader population of campers.