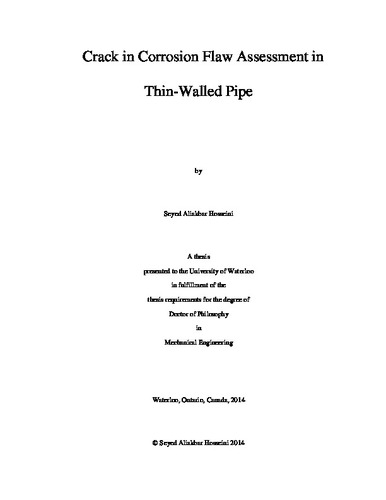 Pipelines are a safe and efficient method for transporting high volumes of oil and gas. However, aging pipelines may experience flaws, such as cracks or corrosion. Present approaches include detection, assessment and repair before flaws may become critical to the integrity of the line. There are different codes and standards for assessing pipeline flaws depending on the type of flaw, with the API 579 being the most common code for the assessment of cracks in oil and gas pipelines. Corrosion is commonly assessed using Modified B31G, CPS or the RSTRENG method. Other methods or procedures such as the Finite Element method may be used for evaluation of crack and corrosion flaws. Cracks may occur coincident with corrosion representing a new hybrid flaw in gas and oil pipelines known as Crack in Corrosion (CIC) that is not directly addressed in the current codes or assessment methods. Hence, the goal of this study was to provide guidance for the assessment of CIC flaws in linepipe. Four full scale rupture tests were undertaken to expand an existing data base in order to evaluate the collapse pressures of lines containing corrosion and/or cracks in a typical line pipe (API 5L Grade X52, 508 mm (20 inch) diameter, 5.7 mm wall thickness). Rupture tests were undertaken on end-capped sections containing uniform depth, finite length corrosion crack or CIC defects. The mechanical properties of the pipe were measured using tensile, Charpy and J-testing for use in applying the evaluation criteria. Failure occurred by the combination of plastic collapse and ductile tearing of the corrosion flaws, cracks and CIC geometries tested. Two rupture tests were also carried out on 914.4 mm (36 inch) diameter pipe, the mechanical properties of these pipes were measured using tensile, and Charpy tests. API Level 3 Methods B & D are the most common procedures for assessing the crack flaws. In addition, FEM Level 3 FAD Method B was also applied which was based on the failure assessment diagram (FAD); however, the Kr ratio was defined as the ratio of the converged elastic-plastic JTotal to that of the critical value (JQ). The Lr ratio was predicted using the actual stress in the remaining ligament (σLigament), calculated using the FEM analysis, to the yield stress. All methods use some measure of fracture toughness. Most common are the Charpy test conversion, fracture toughness test (K) or J test. However, at present, there is no standard approach to measure the fracture toughness of thin-walled pipe, which is a critical parameter in assessing crack flaws. This was addressed by conducting J tests on sub-sized samples to determine the fracture toughness of the thin-walled line pipe steel using the ASTM E1820 procedure. Due to geometry limitations, JQ was determined from the resistance curves (J versus crack extension). The average measured JQ was 197 kJ/m2. The average difference between the predicted failure pressure based on API Level 3 FAD Methods B and D, FEM Level 3 FAD Method B, and the experimental failure pressure was 30%, 14%, and 16% respectively. In the absence of a standard for the evaluation of CIC flaws, they were treated as cracks in a pipe of reduced wall thickness with the same remaining ligament as the original CIC flaws. The average differences between the experimental and predicted failure pressures based on API Level 3 FAD Method B (25%), Method D (16%) and FEM Level 3 FAD Method B (11%) demonstrate that the FAD method can be used with toughness characterized using specimens of similar thickness to the pipe, although the toughness results are not geometry independent.