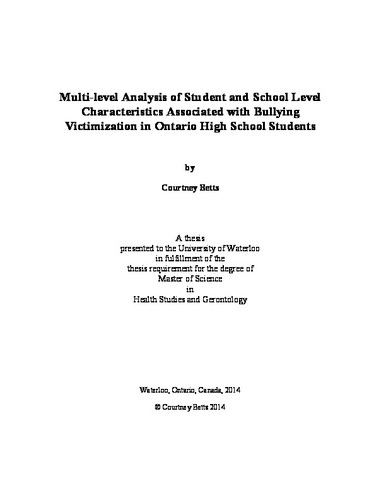 Bullying is a subtype of aggressive behaviour that is repeated over a prolonged period of time, includes an intention to cause harm, and occurs in the context of a real or perceived power imbalance. This study determines the prevalence of physical, verbal, and cyberbullying victimization reported by high school students, whether prevalence varies across schools, and student and school level characteristics that predict the prevalence of bullying victimization. Secondary cross-sectional data collected from the COMPASS study is used. COMPASS’ baseline data collection included a convenience sample of 24 173 high school students in grades 9 through 12 from 43 Ontario schools. This study found that bullying victimization was a substantial problem; overall almost one in four students were involved in bullying. The prevalence of physical, verbal and cyberbullying victimization were found to be 27, 156, and 52 cases per 1000 individuals, respectively. Verbal bullying was the most commonly experienced type of bullying. Three ICC values were calculated to determine that school-level differences accounted for 2.6%, 1.4%, and 3.0% of the variability in the odds of a student being physically, verbally and cyberbullied versus not, respectively. This study is the first to identify that the school a student in grade 9 to 12 attends is independently associated with his/her risk of being bullied. Interestingly, none of the school-level characteristics examined were able to explain a significant amount of the variability, suggesting that additional research is required. Overall, students that were in grades 9 or 10, or used marijuana, or had low academic achievement had an increased likelihood of being victims of all three types of bullying. The results in this thesis can inform school based bullying prevention and practice, specifically by targeted approaches that focus on those most likely to be bullied by their peers.