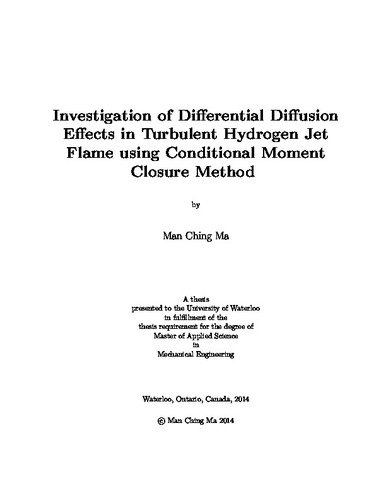 The effects of differential diffusion in the numerical modelling of a turbulent non-premixed hydrogen-air jet flame using a Conditional Moment Closure (CMC) method are investigated. The CMC calculations, which are coupled with computational fluid dynamics (CFD) calculations, relax the commonly used assumption of equal species mass diffusivities. The focus is on the predictions of species mass fractions and temperatures, especially the production of NO. The results of the calculations are compared with available experimental measurements. The formulation of the CMC species transport equation including differential diffusion is presented and the closure of the terms are discussed. Further, the CMC equation for conditional enthalpy is also derived in the present study. The implementation of the CMC equations using two dimensional finite volume method is discussed, including a presentation of the discretised forms of the equations. The results of the CMC calculations including the effects of differential diffusion show that NO mass fractions are increased from the large underpredictions observed for equal diffusivity results near the jet nozzle. Improvements are also found for other species such as H2 and H2O. The results show physical behaviours, such as a shift in the location of the reaction zone and increased reaction rates due to increased diffusion rates of H2. It is also found that differential diffusion effects persist downstream from the nozzle, where the effects are expected to be small, and reasons for the discrepancies are discussed in the present study. The profiles obtained from the CMC calculations show large radial variations, much larger than in equal diffusivity calculations. An analysis isolating the differential diffusion effects of various species shows that the largest changes occur due to the accounting for the differential diffusivity of H2. A budget of the terms in the CMC equations for the differentially diffusing chemical species and enthalpy is also investigated.