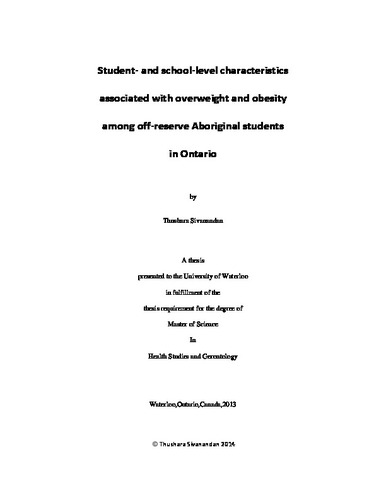 Abstract Objective: This study characterized overweight and obesity among a sample of Canadian off-reserve Aboriginal (ORA) students in grades 9 to 12, identified between-school variability in overweight and obesity, and identified student-level characteristics associated with the weight status outcomes. Methods: This cross-sectional study used student data collected from 29,433 students in grades 9 to 12 from 43 secondary schools as part of the 2012-2013 COMPASS Survey. Logistic regression analyses examined the association between student-level characteristics with overweight and obesity. Results: Among this sample of Canadian students in grades 9 to 12, 14.0 % and 9.2% of ORA were overweight and obese respectively, while 13.7% and 6.0% of non-Aboriginal youth were overweight and obese respectively. While 56.9% of non-Aboriginal youth were normal weight, only 47.1% of ORA youth were normal weight. Between-school random variation in the odds an ORA student is overweight and obese was identified; school-level differences only accounted for 0.1 % of the variability in overweight and 1.0% of the variability in obesity among ORA. Male ORA students were more likely than female ORA students to be obese (OR 2.39, 95% CI 1.28-4.45). Among ORA, for every one unit increase in kilocalories per kilogram (KKD), the odds of being obese (versus normal weight) decreased. Conclusions: Promoting healthy weight among Canadian ORA students is a public health priority, as a substantial number of ORA students are overweight or obese. Additionally, the data illustrates significant differences in the rate of overweight and obesity between ORA and non-Aboriginal students. Considering that KKD was associated with obesity among ORA youth, this helps to further support the notion that increasing physical activity levels among young populations may be a valuable obesity prevention and control strategy. Rather than providing overall youth estimates that may lead to misinformed inferences, future surveillance that report direct comparisons between ORA and non-Aboriginal populations are valuable. These findings underscore the need for culturally appropriate policies and interventions that address the distinct needs of this at-risk population.