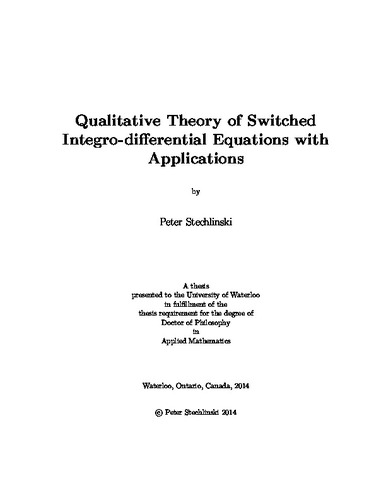 Switched systems, which are a type of hybrid system, evolve according to a mixture of continuous/discrete dynamics and experience abrupt changes based on a switching rule. Many real-world phenomena found in branches of applied math, computer science, and engineering are naturally modelled by hybrid systems. The main focus of the present thesis is on hybrid impulsive systems with distributed delays (HISD). That is, studying the qualitative behaviour of switched integro-differential systems with impulses. Important applications of impulsive systems can be found in stabilizing control (e.g. using impulsive control in combination with switching control) and epidemiology (e.g. pulse vaccination control strategies), both of which are studied in this work. In order to ensure the models are well-posed, some fundamental theory is developed for systems with bounded or unbounded time-delays. Results on existence, uniqueness, and continuation of solutions are established. As solutions of HISD are generally not known explicitly, a stability analysis is performed by extending the current theoretical approaches in the switched systems literature (e.g. Halanay-like inequalities and Razumikhin-type conditions). Since a major field of research in hybrid systems theory involves applying hybrid control to problems, contributions are made by extending current results on stabilization by state-dependent switching and impulsive control for unstable systems of integro-differential equations. The analytic results found are applied to epidemic models with time-varying parameters (e.g. due to changes in host behaviour). In particular, we propose a switched model of Chikungunya disease and study its long-term behaviour in order to develop threshold conditions guaranteeing disease eradication. As a sequel to this, we look at the stability of a more general vector-borne disease model under various vaccination schemes. Epidemic models with general nonlinear incidence rates and age-dependent population mixing are also investigated. Throughout the thesis, computational methods are used to illustrate the theoretical results found.