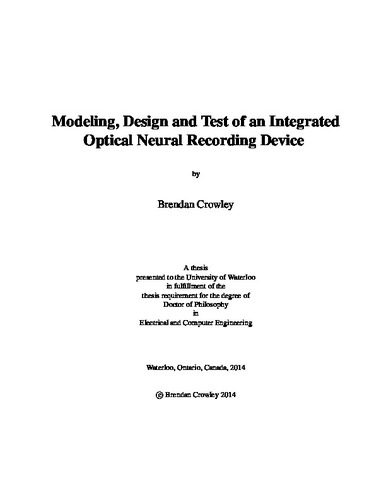 It has long been a goal of neuroscientists to understand how electrophysiological activity in the nervous system corresponds to, and causes, specific physiological actions. Such knowledge could be used to develop cures for disabilities related to nervous system dysfunction, and to control artificial limbs or restore motion to a paralyzed patient. This has motivated research into technologies, broadly termed brain-machine interfaces, for interfacing with the nervous system. One category of such neural interfaces is implantable neural recording devices, which monitor and record neural signals through a microelectronic device implanted in the body. Typical implantable neural recording devices use a micro-electrode array to record electrical signals simultaneously from a multitude of neurons. Unfortunately, devices employing micro-electrode arrays have several issues from both the biological and circuit design points of view. These issues include tissue damage due to implantation of a micro-electrode array, degradation of recording fidelity over time, limited spatial resolution, the requirement to maintain charge balance in tissue, and the difficulty in implementing low-frequency (large time constant) filter cutoffs with limited chip area. These issues provided the motivation to investigate alternative methods for neural recording - namely optical methods based on fluorescence detection with voltage-sensitive fluorescent proteins. Optical recording methods can alleviate many of the issues with electrical recording, as well as provide other advantages, such as recording targeted to specific neurons/neuron types and higher spatial resolution due to reduced recording site pitch. The major limitations of fully implantable optical recording devices stem from size constraints, the attenuation of light in tissue, which limits imaging depth, and the need for genetically programmed voltage-sensitive fluorescent proteins, which must be introduced to the tissue in the case of chronic recording. This research began with investigating the feasibility of replacing an electrical neural record- ing front end with an optical front end - the conclusion being that producing an initial design was worthwhile. Thus, this thesis presents a prototype optical neural recording device for detecting individual spikes in Layer I of the brain. The device is designed for the fully implantable scenario, where space for typical fluorescence imaging optical components is limited, and a high level of integration is required. The thesis describes: 1) Modeling: a general framework for modeling near-field fluorescence detection systems is presented; the model is then extended and applied to the design of the optical neural recording device for detecting individual spikes in Layer I of the brain, taking into account light attenuation in tissue; 2) Design: the design of a high-sensitivity CMOS imaging chip used in the device; 3) Packaging: the packaging of the CMOS imager with LED dies and an excitation filter; and 4) Testing: the experimental results from testing the packaged device with a fluorescent tissue phantom designed to emulate layer I of the brain. Ideas for future work on such devices are discussed.