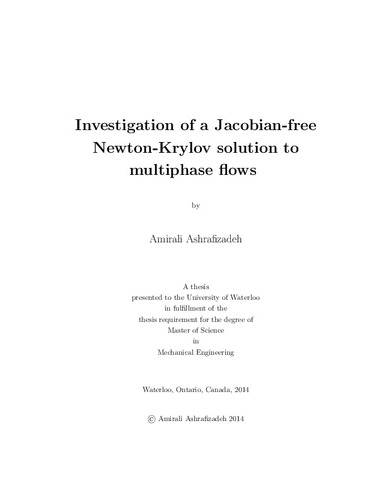 The current study is focused on investigating a Jacobian-Free Newton-Krylov (JFNK) method to obtain a fully-implicit solution for two phase flows. In the JFNK formulation, the Jacobian matrix is not directly determined potentially leading to major computational savings compared to a simple Newton's solver. Prior to the implementation of JFNK to solve two-phase flow problem, it is utilized to solve the governing equations corresponding to single phase flow. The objectives of the present study are (i) Application of the JFNK method to two-fluid models, (ii) Investigation of the advantages and disadvantages of the method compared to commonly used explicit methods, and (iii) Comparison of the numerical predictions with those obtained by the current version of the Network thermalhydraulics code, CATHENA. The background information required is presented and the numerical setup for each test case is discussed in detail. Three well-known benchmarks are considered, the 1D dam break problem, the water faucet and the oscillating manometer. For single phase flow simulations, the Shallow Water Wave Equations is selected to model the motion of the fluid and a backward Euler scheme is utilized for the temporal discretization along with a central-upwind Godonuv scheme for the spatial discretization. For the two-phase simulations, an isentropic (four equation) two fluid model is chosen. Time discretization is performed by a backward Euler scheme and the AUSM+ scheme is applied to the convective fluxes. The source terms are discretized using a central differencing scheme. For comparison, one explicit and two implicit formulations, one with Newton's solver with the Jacobian matrix and one with JFNK, are implemented for each set of governing equations. A detailed grid and model parameter sensitivity analysis is performed to identify the advantages and disadvantages of JFNK for each case. For all three benchmarks, the JFNK predictions are in good agreement with the analytical solutions and explicit profiles. Further, stable results can be achieved using high CFL (Courant–Friedrichs–Lewy ) numbers up to 100 with a suitable choice of JFNK parameters. The computational time is significantly reduced by JFNK compared to the calculations requiring the determination of the Jacobian matrix. This reduction is in the order of 80%.