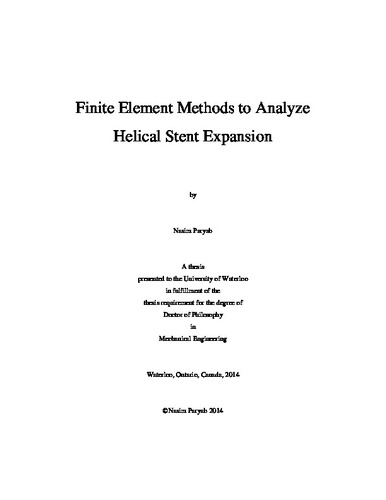 Stent angioplasty or stenting is the standard noninvasive therapy method to address narrowing of the arteries and restore blood flow. Although drug-eluting stents have resolved immediate restenosis (i.e., re-narrowing of the stented arteries), late in-stent restenosis continues to provide challenges for this treatment. One way to address this is through the use of biodegradable stents, such as the helical stent configuration investigated in this work, which may reduce the risk of late in-stent restenosis. The focus of this study was to analyze the mechanical performance and expansion of a polymeric helical stent, applied to a coronary artery. Experimental testing of such a device presents many challenges and is costly. Hence, initial evaluation using numerical methods provides an opportunity to investigate some aspects of the mechanical performance in detail. Existing stent expansion modeling methods originally developed for metallic wire mesh stent simulations were used to investigate the response of a 5 coil polymeric helical stent. The methods include: prescribed displacement, uniform expansion and balloon expansion. It was determined that only the balloon expansion could capture the important aspects of the helical stent expansion such as non-uniform expansion, foreshortening and change in pitch observed in experimental tests, since the expansion mechanism of this stent is different compared to traditional stents. More important, it was found that the helical stent expansion was limited by non-uniform expansion (dog boning) and a unique progressive expansion method was proposed to mitigate this issue. Finally, the stent and progressive balloon expansion models were used to investigate helical stent expansion within an artery containing plaque. The models predicted that interaction with the artery decreased foreshortening compared to free expansion of the stent. An artery with plaque demonstrated higher stresses in the vicinity of the plaque and modest stresses outside of this region, which are desirable in terms of reducing the occurrence of restenosis. The modeling techniques developed in this work have allowed for the evaluation of a novel polymeric biodegradable helical stent and progressive expansion method. The balloon expansion model was found to most accurately predict the geometric effects of expansion and, although this particular stent geometry demonstrated some challenges in terms of non-uniform expansion, the stresses in an artery with plaque were relatively low outside the plaque zone making this a promising approach to address restenosis.