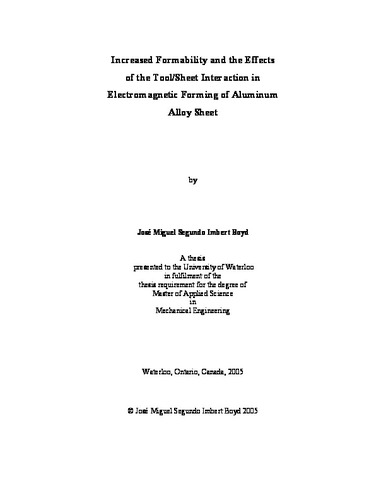 This thesis presents the results of experimental and numerical work carried out to determine if electromagnetic forming (EMF) increases the formability of aluminum alloy sheet and, if so, to determine the mechanisms that play a role in the increased formability. To this end, free form (open cavity) and conical in-die samples were produced to isolate high strain rate constitutive and inertial effects from the effects of the interaction between the die and the sheet. Aluminum alloys AA5754 and AA6111 in the form of 1mm sheet were chosen since they are currently used in automotive production and are candidates for lightweight body panels. The experiments showed significant increases in formability in the conical die samples in areas where significant contact with the tool occurred, with no significant increase recorded for the free-formed samples. This indicates that the tool/sheet interaction is playing the dominant role in the increase in formability observed. Metallographic and fractographic analysis performed on the samples showed evidence of microvoid damage suppression, which may be a contributing factor to the increase in formability. Numerical modeling was undertaken to analyse the details of the forming operation and to determine the mechanisms behind the increased formability. The numerical calculations were performed with an explicit dynamic finite element structural code, using an analytical electromagnetic pressure distribution. Microvoid damage evolution was predicted using a microvoid damage subroutine based on the Gurson-Tvergaard-Needleman constitutive model. From the models it has been determined that the free forming process is essentially a plane-stress process. In contrast, the tool/sheet interaction produced in cone forming makes the process unique. When the sheet makes contact with the tool, it is subject to forces generated due to the impact, and very rapid bending and straightening. These combine to produce complex non-linear stress and strain histories, which render the process non-plane stress and thus make it significantly different from conventional sheet forming processes. Another characteristic of the process is that the majority of the plastic deformation occurs at impact, leading to strain rates on the order of 10,000 s<sup>-1</sup>. It is concluded that the rapid impact, bending and straightening that results from the tool/sheet interaction is the main cause of the increased formability observed in EM forming.